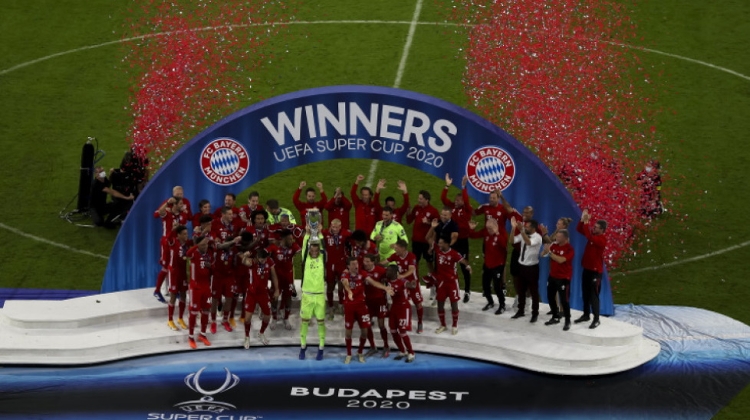 Javi Martinez's extra-time header proved the difference in the Puskás Aréna on Thursday after his Bayern teammate Leon Goretzka had cancelled out Lucas Campos' 13th minute penalty as Bayern Munich defeated Sevilla 2-1 to lift the European Super Cup for the second time in their history.

Despite the new season having only just started, Bayern were already in fine form, fresh as they were from an 8-0 demolition of FC Schalke 04 in their opening Bundesliga fixture last weekend.

Sevilla haven't started their La Liga campaign yet and certainly they looked half a step behind their German opponents in the opening exchanges, the 2020 Champions League winners creating the first chance through Goretzka's pass out to the right for Serge Gnabry to latch on to, but he could only shoot tamely into Sevilla goalkeeper Yassine Bounou's arms.

The six-time UEFA Europa Liga winners soon shrugged off their early lethargy though and started to make inroads into the Bayern half, which were rewarded earlier than they could perhaps have realistically hoped.

Lucas Ocampos headed down Jesús Navas's right-wing cross for Ivan Rakitic to surge through, but he was shoved over by David Alaba, a foul which saw Ocampos stride up to the spot and send Manuel Neuer the wrong way whilst stroking the ball into the bottom-left corner of the Bayern net.

That was Bayern's cue to wrest back control of the first half, a position they didn't relinquish again before half-time.

The first clear evidence of the new champions of Europe's domination came in the 23rd minute when Műller found himself in a fantastic position a matter of metres from goal but inexplicably slid Lewandowski's fine cross wide of the far left post, before Pavard shot high and wide when well placed on the right of the Sevilla penalty area six minutes later.

Lewandowski then streaked clear on goal a minute after the half-hour mark but Bounou stood up well and proved equal to the Polish striker's clipped effort straight at him.

Bayern's pressure was unrelenting and it finally told on an over-worked Sevilla defence in the 34th minute, Lewandowski smartly laying back Müller's right-wing cross first-time for Goretzka to equalise by placing a firm volley past Bounou's right hand and into the right side of his goal.

Sevilla were on the ropes but made it to half-time without any further concessions, at which point they clearly regrouped and reorganised, for it was they who started the second half in a more aggressive attacking style, Niklas Süle - admittedly under heavy pressure from de Jong - forcing an excellent, low save from his own goalkeeper inside his near, right post when he inadvertently stabbed the ball goalwards from Sergio Escudero's cross.

As we've come to expect from Hansi Flick's Bayern side, they weren't caught on the hop for long and soon re-established their authority, nearly taking the lead from a flowing move in the 52nd minute which ended with Lewandowski poking the ball into the Sevilla net, only for the video assistance referral system to rule the goal out for an earlier offside.

This second period was a more even contest than the first and indeed it became a rather attritional affair for the next 20 minutes until Bayern again increased the tempo and created yet more chances, Gnabry's cut-back in the 76th minute flying towards Lewandowski, only for desperate defending to divert the ball for a corner, from which Lucas Hernandez volleyed low and just wide of the right post.

Thomas Müller then drove low into Bounou's arms two minutes later as Bayern turned the screw, but Sevilla's by-now battle-hardened defence stood firm and the chance their forwards had been waiting for on the counter-attack finally arrived three minutes before the end of normal time, a wild swish at a half-cleared corner by David Alaba, Bayern's deepest-lying outfield player a mere 30 metres from the opposing goal, allowing Sevilla substitutes Óliver Torres and Youssef En-Nesyri to break, the former sending the latter through on goal, only for his low left-footed shot to be superbly tipped away by a scrambling Neuer.

There were no more twists in the tale before English referee Anthony Taylor blew the whistle for full-time and necessitate two 15-minute periods of extra-time.

Sevilla threatened initially, first through Joan Jordán's burst to the right byline which resulted in a corner and then through En-Nesyri's slaloming run which ended in a shot that Neuer again did superbly well to deflect onto his right post and out into the goalmouth, from where the ball could be cleared.

Substitute Corentin Tolisso then tested Bounou low down at his near-right post in the 101st minute as Bayern came back into the game and a corner a couple of minutes later caused panic in the Sevilla ranks, but this time they weren't able to avoid punishment, Bounou palming Alaba's volley back into the danger zone and yet another substitute, Javi Martinez, heading the ball back past the Canadian goalkeeper and into the left side of the net for a fully-deserved 2-1 lead.

Indeed, it could have become even worse for the Spanish club but Diego Carlos managed to head Süle's close-range shot away from danger as the whistle for the end of the first-half of extra time blew.

Again Sevilla started a new period with an effort at goal, Escudero volleying Navas' right-wing cross high and wide on the stretch before, at the other end of the pitch, an acrobatic Müller nearly hooked a Davies cross from left on target at the back post.

Time was running out for Sevilla to find an equaliser and indeed their energy too. Pushing forward left spaces at the back and in truth Hansi Flick's team looked more likely to extend their advantage rather than surrender it.

In the event neither happened. Taylor blew his final whistle and Bayern Munich were crowned 2020 UEFA Super Cup winners.