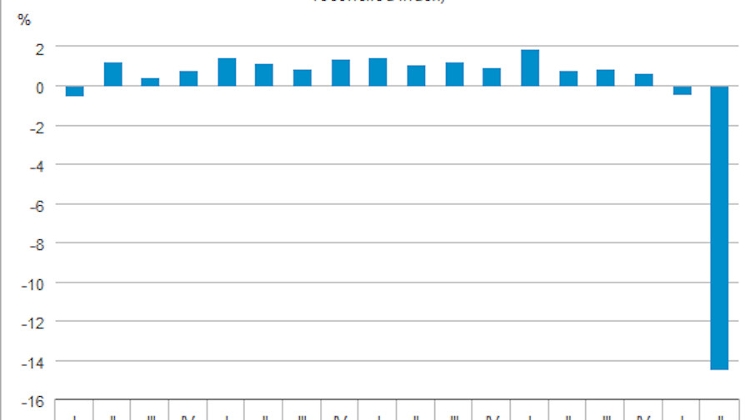 Hungary’s economic output shrank by an annual 13.6% in the second quarter this year, with industry and services contracting sharply due to the pandemic, according to a second reading of the data published by the Central Statistical Office (KSH).

Adjusted for seasonal and workday effects, GDP fell by 13.5% in Q2. In a quarter-on-quarter comparison, GDP was down an adjusted 14.5%. For the first half, GDP declined by an unadjusted 6.1%.

On the production side, gross added value in the industrial sector dropped 20.1% and the construction sector contracted by 13.2%.

Services declined by 12.2% as the commerce, commercial accommodations and catering sector contracted by 12.6% and the ICT sector shrank 1.8%.

On the expenditure side, actual final consumption of households fell by 8.6% and gross fixed capital formation dropped 13.5%.

The trade balance contributed 7.7 percentage points to the economic contraction.

ING Bank chief analyst Péter Virovácz said the detailed data show a better chance of a speedier recovery as they indicate the industrial sector is finding its footing, net exports are improving at a faster clip, and consumption is declining less than expected.

ING is standing by its projection for a 5.5% full-year economic contraction, at least until July industrial output data are released later in the week, he added.

K&H Bank senior analyst Dávid Németh said a pick-up in the industrial sector and in domestic tourism would support an improvement in GDP data for Q3. He put the full-year decline in GDP at around 6%.