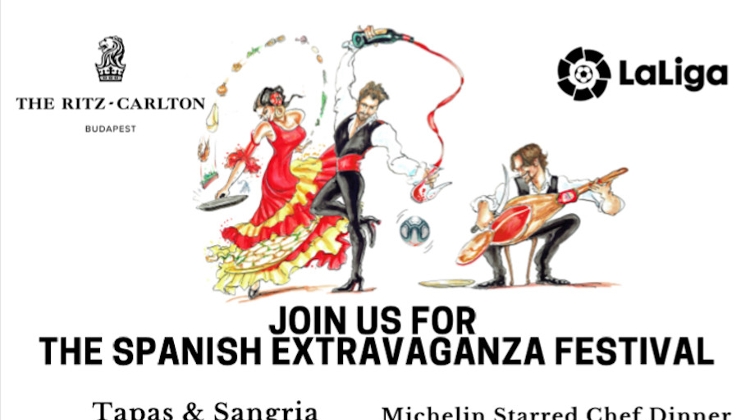 This Spanish Extravaganza Festival by LaLiga is designed to bring you the true tastes of Spanish culinary expertise, uniquely available here in Hungary between 28 February – 01 March.

Spains’s cooking legend, Ferran Adrià, voted the best chef in the world five years running, gives his full backing to the festival. “In Spain food is everything” he says, “We live longer, happier and better because of what and how we eat. My friends´ project, the Spanish Extravaganza Festival, is on a mission to share this with the world.”

Now the Spanish Extravaganza Festival is bringing all these delights to The Ritz-Carlton, Budapest. For the first time in Budapest, five award-winning Spanish chefs will give our guests the chance to taste bespoke regional tapas, signature paellas and Michelin-star fine dining with authentic Spanish food, wines, in a true Spanish lifestyle experience with live music performance (flamenco and Spanish inspired Opera songs).

Michelin-star Rafael Centeno Moyer, master chef of Maruja Limon in Vigo, a restaurant that has maintained a Michelin star since 2010, Ager Urigüen, owner-chef of the Txokoa restaurant in Berlin, and Jordi Gimeno Benito, the crowned king of Spanish national cuisine, will cook Spanish delightes from all regions together with 2 other Spanish Chefs from Andalucia and Tenerife.

The festival kicks off on Thursday, 27 February with a press event followed by an authentic Spanish tapas and wine tasting on Friday afternoon, at Kupola Lounge.

Saturday will be the night of the sophisticated Spanish cuisine: a refined six-course menu, created by Michelin-star Rafael Centeno Moyer, available in two sittings, from 6 p.m. and from 9 p.m..

Chef Rafael Centeno is a fully self-taught chef, who wandered into the kitchen of his wife’s restaurant one day, and ten years later was awarded his city’s only Michelin star Chef. He has also been listed in the 100 best chefs in Spain by Lo Mejor de la Gastronomia, the country’s most prestigious gourmand guide.

As the European football fans known, "ElClásicó" is the everlasting successor of the two biggest rivals in Spain, Real Madrid and FC Barcelona, regardless of the actual stake of the match. In addition to the UEFA Champions League final, it is considered to be one of the most important, exciting events at the forefront of European football, followed by millions of fans live in front of the screens and a lucky few at the stadium venue.

As Hugo Lecanda, General Manager of The Ritz-Carlton, Budapest, emphasized: “We are proud that LALIGA has thought of our hotel as the venue for the program. This recognition is even more important to me, as I am both Mexican and Spanish citizen. I know that in Spain, food and football are the epitome of great life, so it's a pleasure to be at the center of this life and celebration. With this series of events, we would like to give our guests memorable experiences, which might allow them to get a closer look at the combination of Spanish gastronomy, culture and football.”