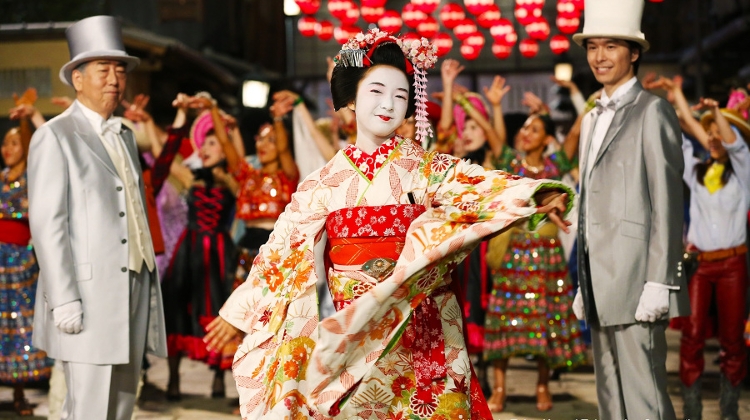 Presenting the largest repertoire to date, until 7 March 2021, 30 Japanese works can be viewed in the original language, with English subtitles, throughout the country.

During the festival, three films will be available every day on the watch.jff.jpf.go.jp website.

All can be watched in a 24-hour window several times if the audience wishes to do so. The festival will be colored by several additional programs on the website of the Japan Foundation that organizes the event.

On Saturday 27 February at 9 a.m. the festival will screen their latest work of Yaguchi Shinobu, the director of Waterboys, a classic of comedy, and the highly successful Swing Girls. Dance With Me combines the atmosphere of Hollywood musicals with Japanese humor.

The film, in which Shizuka having met a hypnotist becomes the devil of the parquet, won the Kobayashi Audience Award as well as the Special Director Award at the 2019 Toronto Japanese Film Festival.

On March 1, at 9 a.m., a 1952 Japanese classic will be shown. In Ozu Yasujirō’s drama The Flavor of Green Tea over Rice, Taeko and Mokichi - who live in a traditionally arranged marriage - with the arrival of their stubborn niece, Setsuko realize, why they are not happy with their current relationship. In his characteristic way, the director depicts the family unit in crisis with humor and warmth - and a drop of resignation.

Two films by Okita Shuichi, one of the most promising figures in contemporary Japanese cinema, will also be screened at the festival.

On March 2, at 11 a.m., set in 1987, in A Story of Yonosuke the protagonist moves to Tokyo to begin college, where instead of the young Shoko, his attention is drawn to the older, mysterious “woman of doom,” Chiharu.

As Yonosuke’s strange story unfolds, we can get a glimpse into the lives of his friends 16 years after the events, but by then he’s already missing from their circle.

For lovers of art movies on March 3 at 11 a.m. the film 0.5 mm, which articulates thoughts about Japan’s aging society with dark humor can be exciting.

On March 6, at 9 a.m., Okita Shuichi’s other work – that was recognized at the 2014 Tokyo International Film Festival -, Ecotherapy Getaway Holiday will be screened. This comedy tells the story of a 2-day hiking excursion.

Right at the beginning it can be suspected that the green-eared tour guide is not at the height of the situation, and soon after, he is lost in the woods. So the company is left alone and they soon realize that survival is their main task…

Then, at 11 a.m., Ishii Yuya’s simultaneously thought-provoking and entertaining literary adaptation, The Great Passage will be shown. It’s about a linguistic odd fish who dissects the true meaning of words.

The full program is available at japanalapitvany.hu where interviews with five Japanese directors, as well as one with Tamás Liszka about Japanese animation and Csilla Béresi, the Hungarian translator of the touching novel by Kawaguchi Toshikazu - from which the film Café Funiculi Funicula is adapted – will be available.

The participation in the festival is free, but registration is required, which can be done via the following page: watch.jff.jpf.go.jp/signup.html.

On Friday, February 26, at 11 a.m., you can watch one of the latest works of the legendary director of The Ring and The Ring 2, Nakata Hideo, Stolen Identity, in which due to the loss of a cell-phone a couple in love experience a series of strange events around them.

Makoto has no idea that beautiful Asami will soon become the prey of a serial killer, and that there is actually a dark secret behind her beautiful face.