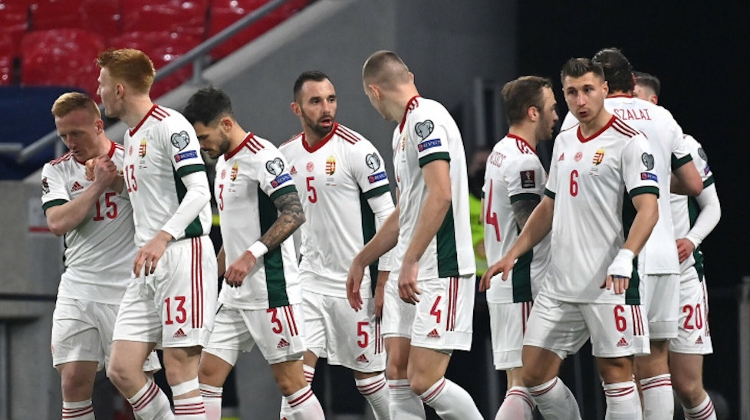 A thrilling game between Hungary and Poland in the Puskás Aréna ended 3-3 tonight, but the hosts may wonder what might have been, having led 2-0 and 3-2 during the second half of this opening FIFA World Cup qualifying fixture.

Roland Sallai gave Hungary an early lead which Ádám Szalai doubled shortly after half time, but Poland scored twice in two minutes to equalise once and then again through Robert Lewandowski after Willi Orbán had re-established Hungary's winning position. Attila Fiola's late red card for two bookings meant Hungary had to settle for just a point.

Hungary head coach Marco Rossi opted for a 3-5-2 formation, Péter Gulácsi in goal behind a back three of Attila Szalai, Orbán and Fiola, with Ádám Szalai and Sallai leading the line ahead of Ádám Nagy, László Kleinheisler and Zsolt Kalmár in central midfield, Szilveszter Hangya on the left and Gergő Lovrencsics on the right.

One might have expected a cautious approach given that both wide players are normally full-backs, but Hungary belied that anticipation by settling into the game immediately. Kleinheisler saw an early strike ruled out for a foul on Krychowiak but the home side were soon ahead anyway, Fiola's superb, long, threaded pass starting a swift counter-attack which Sallai successfully finished by slotting the ball coolly inside Wojciech Szczesny's near left post in the sixth minute.

Thirteen minutes later, Kalmár kept possession well under pressure wide on the left near the halfway line before finding Nagy, who advanced and slipped the ball wide to Hangya in the left wing position. His pass across the box rolled invitingly for Lovrencsics but the Ferencváros captain could only shovel his shot straight at Szczesny.

The visitors were barely in the game at this point but they did fashion their first chance in the 27th minute when Jakub Moder headed a right-wing cross wide. Two minutes later, Fiola struck an 18-metre shot wide following a clearance from another flowing Hungary attack and in the 35th minute, Lovrencsics' low, hard cross from the right was bundled wide by Ádám Szalai at the near post under tremendous pressure from an alert Poland defender.

Four minute from the end of normal time in the first half, Helik was perhaps a little lucky to stay on the pitch when fouling Sallai and halting a promising Hungary attack while already on a yellow card.

Still, Hungary didn't let that or the half-time break affect their momentum and in the 52nd minute they doubled their lead, Lovrencsics sliding in Kleinheisler in the right channel and the midfielder crossing for Sallai, whose blocked shot spun up perfectly for Ádám Szalai to score his first international goal since November 2019 against Uruguay.

A two-goal advantage was no more than Hungary deserved att his point, but all that hard work effectively disappeared after a crazy couple of minutes just after the hour mark when Poland somehow wiped out that deficit through precise finishes from substitutes Krzysztof Piątek and Kamil Jóźwiak.

Hungary didn't let this huge shock destroy their determination and to their credit they retook the lead in the 78th minute, Ádám Szalai swinging in a left-wing cross which substitute Lang flicked on for Orbán to volley into the net at the far post.

Poland are not ranked 19th in the FIFA world rankings for no reason though and it was their brightest star Robert Lewandowski who restored parity, his inch-perfect drive from 12 metres finding the top-right corner of the Hungary goal to make it 3-3.

Both teams pressed for a winner in the latter stages but the only event of real note was the second yellow card shown to Attila Fiola, which saw him dismissed from the pitch in added time.

In group I's other opening matches, England defeated San Marino 5-0 and Albania squeezed past Andorra by a single goal. Marco Rossi's men will now look to follow up this point withtheir first win of the campaign away in San Marino on Sunday.