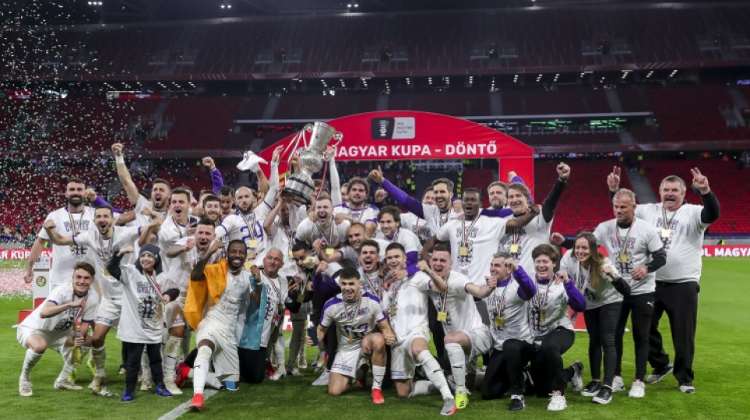 Lirim Kastrati was Újpest's hero, his extra-time strike proving to be the only goal of a tense and exciting contest as the Budapest club won their 11th Hungarian Cup against MOL Fehérvár in the Puskás Aréna on Monday evening.

A well-contested but ultimately attritional first ninety minutes had seen Fehérvár striker Nemanja Nikolic head well over the crossbar 19 minutes into the first period and Újpest's Giorgi Beridze draw a superb save from opposing goalkeeper Dániel Kovács 19 minutes from the end of normal time.

There was still time for the game to takea decisive turn before extra-time dawned, Adrian Rus was dismissed in the dying embers of the second half for two bookable offences and substitute Alef followed for the same reason in the 97th minute, his two cautions coming within two minutes of each other.

Just a couple of minutes later, Újpest scored the crucial goal which would win Michael Oenning's side the trophy. Tallo heading a left-wing cross back to Nikola Mitrovic who laid the ball back to Kastrati to strike beautifully on the half-volley into the bottom-left corner of the net.

There was little sign of nine-man Fehérvár finding a way to create any concerted pressure in the final twenty minutes of extra-time, Újpest instead easing through to their 11th Hungarian Cup triumph.