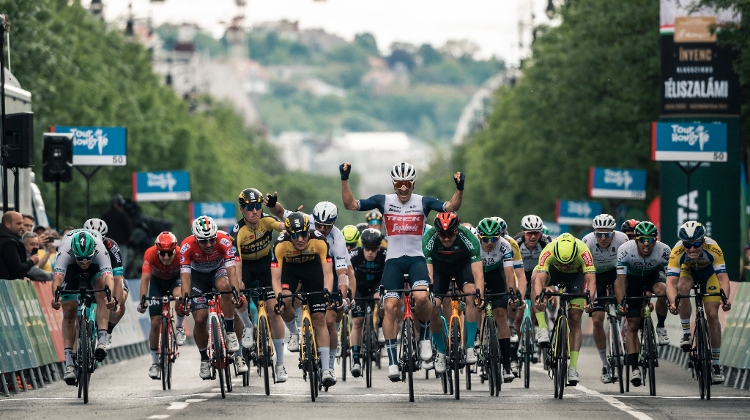 Lots of fans could see the final stage of the 42nd edition of Tour de Hongrie, on the TV-screens worldwide, on the streets, in the venue. The route covered a beautiful part of Budapest, at the end Belgian Edward Theuns became the winner of the stage, Australia’s Damien Howson won the general classification.

Last stage of Tour de Hongrie contained 92 km, around Heroes Square and Városliget. The average speed of the peloton, with 117 riders, was 52 km/h in the first lap. Viktor Filutás, the reigning Hungarian champion, and the member of National Team of Hungary, Balázs Rózsa dr. attacked, then during the second lap Erik Fetter did the same – with further three riders they collected the seconds.

Four riders were in breakaway, Belgian Jordi Warlop (Sport Vlaanderen-Baloise) won the first and second intermediate sprints, Italy’s Manuele Boaro (Astana-Premier Tech) won the third one. However, as it was expected, the teams of the sprinters changed the speed breakaway was caught by the peloton. Several WorldTeams and ProTeams were leading the race and stage finished and was decided in bunch-sprint.

Tour de Hongrie kicks off on the shores of Lake Balaton

The 42nd edition of the Tour de Hongrie, Hungary’s very own professional road bicycle stage race, kicks off today in Siófok on the southern shores of Lake Balaton and will take the peleton all the way to Kaposvár.

On stage 2, the race will head from Balatonfüred on Lake Balaton’s north coast, to Nagykanizsa, known as the “greenest city of Hungary”, before turning north for stage 3, from Veszprém to Tata.

After five days of racing, including a particularly mountainous stage to Hungary’s highest point in Gyöngyös-Kékestető on Saturday, the 2021 edition of the race will end, as per usual, in Budapest on Sunday.

The race will be largely covered on Eurosport channels and digital platforms.

With its first edition taking place way back in 1925, the Tour de Hongrie is one of the oldest stage races on the international cycling calendar and even predates the likes of the Vuelta a España, Tour de Suisse and Critérium du Dauphiné.

Despite being one of the oldest races on the UCI’s racing calendar today, the Tour de Hongrie has only been held 41 times throughout its 95-year history, largely due to the political changes that occurred in Hungary following the end of World War II.

After a long 30-year hiatus, the race returned for a short period in the 90s and 2000s but it wasn’t until 2015 that it really established itself again and adopted the format that we’ve come to know it for today.

As a result, the Tour de Hongrie has in recent years discovered a fair amount of young stars, including last year’s winner, the young Hungarian talent Attila Valter, tipped to become one of the next best Grand Tour riders, and none other than the young Slovenian phenom and Tour de France winner, Tadej Pogačar, who finished third here back in 2017.