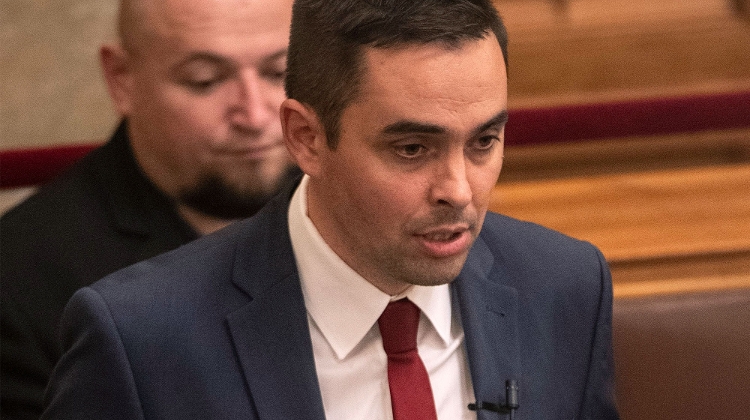 A meeting of parliament’s national security committee, scheduled to be held behind closed doors to discuss issues around the Pegasus spyware on Monday, failed to reach quorum as deputies of the ruling parties stayed away.

János Stummer, the head of the committee for opposition Jobbik, - pictured above -  Socialist MP Zsolt Molnár and LMP’s Péter Ungár had talks with Interior Minister Sándor Pintér, who was to have participated in the aborted meeting.

Stummer said he would convene the committee for the first day of parliament’s autumn session, and proposed setting up a fact-finding investigation in connection with Pegasus.

Referring to earlier press reports suggesting that the government had used Pegasus to spy on journalists, politicians, and other public figures, Stummer said that “the government pretends as if there were no scandal but only scare-mongering, while they are using every means to avoid political responsibility.”

He noted that a parliamentary fact-finding committee could not be set up in the case since the Regional Prosecutor’s Office of Investigations of Budapest was investigating the matter, but said that his committee’s opposition members would find out “if such a software was purchased in recent years, and if so, who, when, for what purpose and under what licence had used it”.

He added that it must be ensured that such spyware is not applied in future as “it has no place in a country governed by the rule of law”.

Molnár said that although the spyware may well have been procured legally, “the main question is not its purchase but … if it was abused”.

He slammed the ruling parties for boycotting the committee meeting, and called their absence “confirmation that they have something to hide”.

“Truth cannot be obliterated by technical moves such as rendering a committee meeting invalid,” Molnár said.

Referring to the upcoming general elections, he added that “a definitive solution could be achieved in spring 2022”.