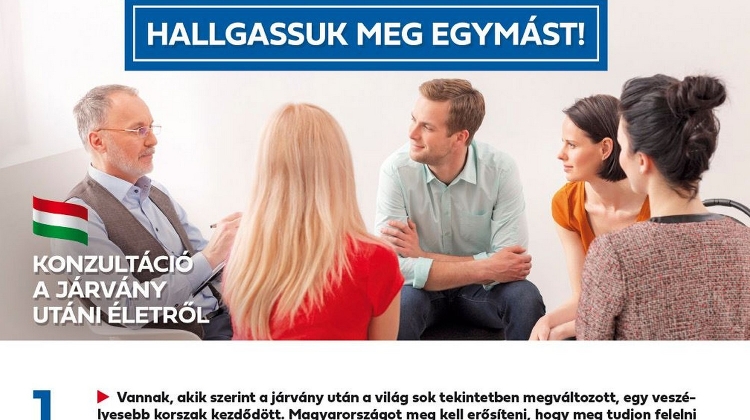 Left-wing weeklies sharply dismiss the government initiative to hold a referendum on the sexual education of children as a pointless act of propaganda.

A right-wing commentator only agrees with them on one point – namely that the plan should be read in the context of mutual efforts to mobilise supporters ahead of next year’s parliamentary election.

In Jelen, Tamás Ónody-Gomperz suggests that the referendum, ostensibly planned to support the recent controversial legislation on sexual education, was a reaction to the international spyware scandal.

Hungary was named as one of over 50 countries worldwide using the Israeli made Pegasus spyware to hack telephones.

Ónody-Gomperz interprets the referendum initiative as proof that the authorities have hacked the telephones of citizens. But once they have launched the campaign on gender issues, he concludes, they will have to stick to that theme right up until next year’s elections.

In a furious editorial, Magyar Narancs likens the idea of a referendum on gender issues to mediaeval blood libel campaigns against Jews, because the editors are convinced that its aim is to foment hatred – this time, against non-heterosexual people.

They hope that the attempt will backfire as they believe that the questions to be put to voters make no sense at all. In a second editorial, they praise this year’s Gay Pride parade in Budapest as different to all previous parades. What made it special, they explain, was that this time participants didn’t simply demonstrate in support of LGBTQ people but in order to express their opposition to what editors define as Prime Minister Viktor Orban’s ‘power folly’.

In 168 óra, sociologist Endre Sík compares the national consultation on sexual education to the planned referendum and finds them both similar and different.

They differ in that the national consultation questionnaire contains answers formulated as questions, while the five questions of the planned referendum are rather professional.

The two are similar in the sense that both serve the goal of defining the agenda of public discourse. Sík also believes both projects are intended to arouse panic with the intention of mobilising government supporters.

In Magyar Hang, Róbert Puzsér finds it strange for the government to choose gender issues as a campaign topic, since demonising non-heterosexuals proved an unworkable strategy in Poland last year during the presidential elections, even though Polish society is much more conservative than Hungarian.

In fact, polls have shown a strong majority of Hungarians to feel inclusive towards homosexuals, lesbians, bisexuals and even transsexuals.

Nevertheless, he senses a trap for the opposition and cautions them against simply waging a battle in support of LGBTQ people. Instead, they should explain that they have no intention of introducing gender issues onto the school curricula of young children and should call out the government as the one doing so.

In his Mandiner editorial, István Joó interprets the idea of the referendum as part of the propaganda give-and-take between the government and the opposition.

When the opposition parties launched their primaries to choose their candidates for prime minister and the individual constituencies, they managed to place themselves at the centre of public attention.

A counter-offensive was launched by the government with the legislation on sexual education, which he reads as a move to counter sensitising campaigns by LGBTQ organisations.

Then the Pegasus scandal blew up as another blow to the government, which stands accused of spying on its own citizens. In Joó’s view, the government announced its initiative for a referendum as a response to those accusations.

With the referendum, he continues, the Prime Minister is asking for help, and the question is whether people will turn out in sufficient numbers to do so.

He thinks they will, because as polls have shown, most Hungarians want to keep controversial gender debates out of Hungarian schools.

A pro-government commentator argues that the referendum and the law it serves to support are intended to defend children from aggressive LGBTQ propaganda.

An opposition-leaning author dismisses the initiative as a ploy to mobilise Fidesz supporters.

In Magyar Hírlap, Csilla Korompay dismisses opposition claims that the ‘child protection law’ and the referendum to support it both address non-existent problems, as LGBTQ activists play no role in public education.

Korompay argues that opposition leaders entertain friendly relations with LGBTQ organisations and would open state schools to their activists should they win next year’s election.

On Azonnali, Donát Szűcs writes that both sides are busy mobilizing their bases in preparation for the parliamentary election scheduled for next spring.

While the opposition stages unprecedented nationwide primaries to choose their common candidates, the government has responded by launching a referendum campaign ostensibly in defence of Hungarian children.

He finds it disingenuous of the government to use children for what he sees as a clearly political purpose.