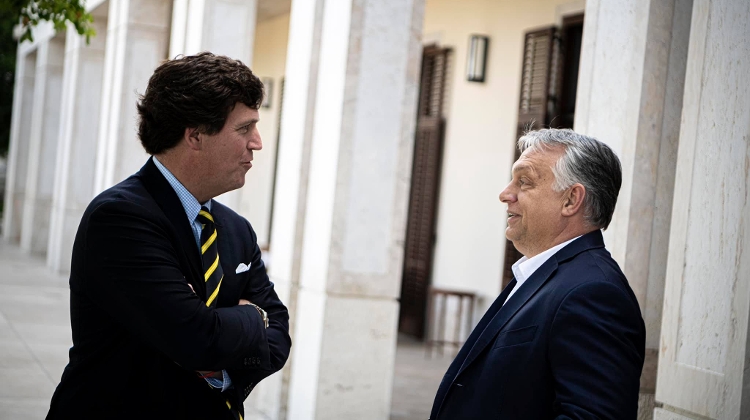 This morning I managed to find an hour to listen to a radio program that focuses on foreign affairs in the hope of catching a discussion on Tucker Carlson’s “historic” visit to Hungary.

For a good 20 minutes I was subjected to an agitated discussion over the moderator’s claim that Viktor Orbán had scored a major win in enticing “the most influential conservative thinker in the United States” to spend a week in Hungary.

The guest, who tried in vain to explain that Tucker Carlson’s influence is pretty much limited to the Trumpist wing of the Republican Party, couldn’t sway the moderator, even though he is no friend of the Orbán regime.

He reminded me of a regular contributor to the comments section of Hungarian Spectrum who is convinced of the infallibility of Viktor Orbán and the total ineptitude of the politicians in the anti-Orbán forces.

By the time that conversation took place on Friday night, the transcript of the Orbán interview was already available, which indicated that the self-confidence of the always-victorious Viktor Orbán has been battered in the last few months as a result of, among a host of other things, the loss of his powerful supporters Donald Trump and Benjamin Netanyahu. He is now alone on the international stage without any friends, with the exception of Beijing and Moscow.

Moreover, by the time this objectionable radio program aired, scores of opinion pieces from respectable mainstream papers in Hungary and abroad were already available. Their emphasis was not on the ostensible foreign policy success of the Orbán government but on the sudden discovery of the true nature of the Orbán regime.

Before the Carlson interview, the extent of the degradation of Hungarian democracy had not been fully recognized by the American media.

Moreover, after this encounter it became apparent to many journalists that Trumpist conservatives are using Carlson to pave the way for a new Orbán-like Trump who is smarter than the former president and who will be able to create an undemocratic, authoritarian, not fully democratic United States.

If anything, this much sought-after visit was a blunder on the part of the Orbán regime because its true nature was exposed to a wide American audience.

The enthusiastic journalist simply couldn’t get over the fact that Carlson has three million viewers, which is indeed an impressive number.

But what people don’t realize is that Carlson’s liberal competitor on MSNBC, Rachel Maddow, hosted the most-watched show in the first quarter cable news ratings.

According to Forbes, The Rachel Maddow Show delivered an average total audience of 3.604 million viewers in the first quarter of 2021, ahead of Tucker Carlson Tonight with 3.427 million viewers. What is perhaps even more impressive is the number of YouTube views of a segment of “Last Week Tonight with John Oliver” from March in which he explained “where Tucker came from, what his rhetorical tactics are, and what he represents.” Oliver spared no words in describing Carlson and his white nationalist followers.

By the time I visited the site, 12,280,133 people had heard the British-born comedian, who was anything but funny that day.

Then came the great moment when Tucker Carlson delivered his speech on Esztergom’s Széchenyi tér, modestly titled “The World according to Tucker Carlson.”

He was supposed to entertain his audience for about an hour, but it seems that his ideas about the world couldn’t be stretched that far.

According to all the sites that covered the event, the audience was small, a few hundred. Because Mathias Corvinus Collegium hosted the event, many young people were in the audience, most likely students of the institution with a fair command of the English language.

The older folks with American flags struck me as possible Hungarian-American pensioners who retired to Hungary and whose view of the world is not far from that of any Trumpist crowd.