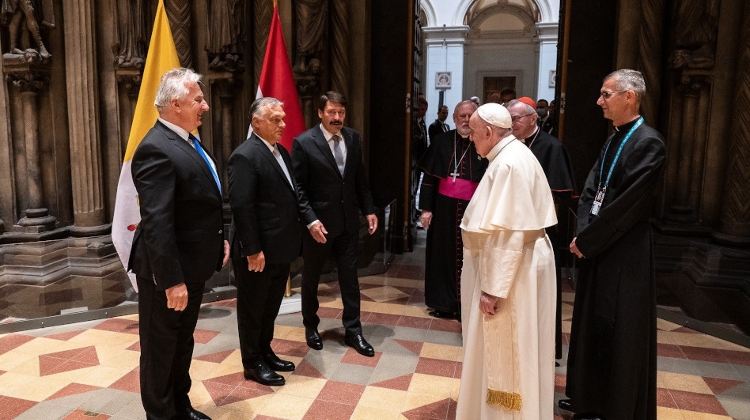 Pope Francis arrived in Hungary on Sunday on his first foreign trip since undergoing intestinal surgery in July. The Pope urged Hungary to “extend its arms towards everyone,” as the pontiff opened a four-day visit to Central Europe, according to Euronews.

The comments were interpreted by some as a veiled critique of Prime Minister Viktor Orbán’s anti-migration policies, whom Francis met earlier on Sunday despite conflicting views on a range of issues. Francis has long expressed solidarity with migrants and refugees — he once brought a dozen Syrian Muslim refugees home with him during a trip to a refugee camp in Greece — and criticized what he called “national populism” advanced by governments like Hungary’s.

Closing a Church congress with a Mass for tens of thousands of people in central Budapest, Francis used the imagery of a cross to show that something as deeply rooted as religious belief did not exclude a welcoming attitude. “The cross, planted in the ground, not only invites us to be well-rooted, it also raises and extends its arms towards everyone,” he said in his remarks after the Mass.

Orbán greeted the Argentine pope at the Museum of Fine Arts and the two went into a private meeting attended also by the Hungarian president and Vatican officials. Hungary’s hard-line stand on migration apparently didn’t come up. The Vatican said the meeting was held in a “cordial atmosphere" and lasted longer than expected — 40 minutes.

"I asked Pope Francis not to let Christian Hungary perish," Orbán said in a post on Facebook after the meeting.

According to news agency MTI, the pope was joined at the meeting by President János Áder and Deputy Prime Minister Zsolt Semjén. Pope Francis was accompanied by Vatican Secretary of State Cardinal Pietro Parolin and Archbishop Paul Richard Gallagher, the Vatican's foreign minister.

“Among the various topics discussed were the role of the church in the country, the commitment to the protection of the environment, the protection and promotion of the family,” said a Vatican statement. Francis only spent seven hours in Budapest on Sunday before moving on to a three-day, hop-scotch tour of neighboring Slovakia.

Trip organizers have insisted Francis isn’t snubbing Hungary, noting that the Hungarian church and state only invited him to close out an international conference on the Eucharist on Sunday.