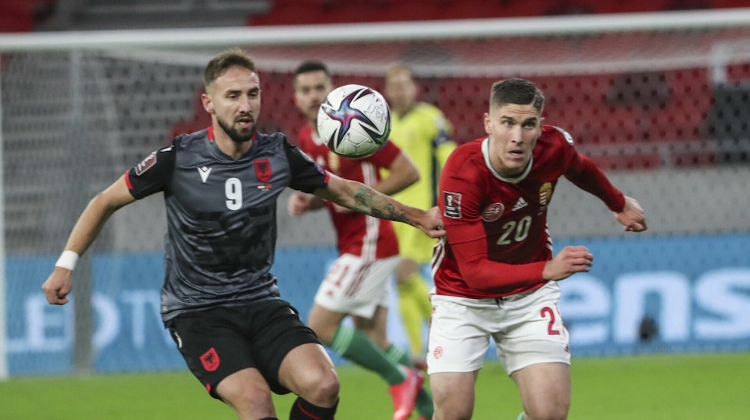 Upfront, Roland Sallai was partnered by near namesake Dániel Sallói in the absence of the injured Ádám Szalai.

In a probing first half-hour, Nego twice breached the visiting defence with right-wing crosses towards Sallói - on the occasion of the latter's first international start - but the first was blocked and the second was just too far ahead of the Sporting Kansas striker as he entered the penalty area.

The same two players were involved in the next action worthy of note too, when he sent Endre Botka in behind the Albania left-back in the 47th minute, but his cut-back was slotted wastefully wide by Sallói at the near post.

Albania's first opportunity to score came as late as in the 57th minute, Myrto Uzuni, who plies his trade for Hungarian champions Ferencváros breaking in on goal, only for Gulácsi to beat away his rising shot.

Uzuni saw a tame header gathered by Gulácsi moments later and Gjasula waste drove low and wide from 20 metres midway through the second half as Albania finally began to show why so many of their players play for clubs in top European leagues.

It was one of those much-vaunted players, Armando Broja, as a forward for Southampton on loan from fellow Premier League club Chelsea, who opened the scoring in the 80th minute.

Substitute Broja - on for Uzuni in the 66th minute - capitalised on a mistake by Attila Szalai on the left touchline and beat the same player at least twice on his way to drilling the ball low and hard into the far right corner of Gulácsi's net.

The visitors deserved that lead for their improved second-half display and it was one they preserved until the final whistle, Hungary's third defeat in four games now meaning they're likely to need to win in England and Poland in the next five weeks to maintain any chance of reaching at least the World Cup play-offs.