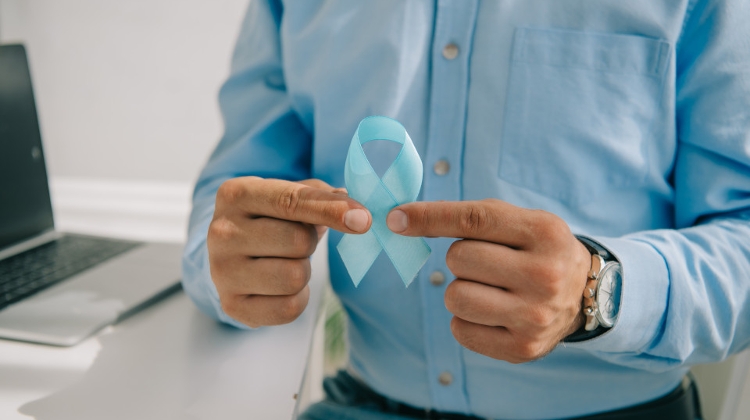 In Hungary, prostate cancer is one of the most common causes of death from cancer in men, with 4,000-4,500 men diagnosed with the disease each year. The most dangerous of the prostate diseases is malignancy, which can now be screened and is very curable.

Why is it worth examining the prostate?

Any prostate disease can come to light, hence a lesion discovered in time can be cured, be it a benign or malignant enlargement or inflammation, or another disease affecting the prostate. So naturally, the importance of prostate cancer screening cannot be overstated.

At what age is testing recommended?

What does the examination consist of?

In the case of a prostate examination, a very important factor is control of the PSA level, which is supplemented by a physical examination. PSA (prostate specific antigen) is a protein that is produced by the prostate and is only found in men. Tendency in blood counts may indicate disease, with elevated serum protein levels in various prostate diseases.

The prostate is an organ roughly the size of a ping-pong ball, for which a malignant lesion on its surface becomes palpable. The tumor can be so small that the PSA level is not yet elevated and yet the abnormality is palpable during the physical examination, so it is necessary to perform the physical examination as well. If both of our tests are negative, the screening tests should be repeated after a year. If the test results are in the gray zone or positive, further investigations are necessary.

From the change in the PSA level, we can draw conclusions, for example, we examine the doubling time, how long it takes to double the PSA level, as this data is indicative. Of course, it should be noted that as we age, our normal PSA levels also increase.

The rate of increase in PSA levels in the case of prostate cancer is likely to show a rapid (exponential) increase, in which case the physical examination is very important. If the increase in PSA levels has been faster than expected - which, incidentally, is also worth comparing to the size of the prostate - then testing must progress.

This is a further step in the MRI scan, which, if it shows that there is a risk of a tumor, requires an ultrasound-guided biopsy of the lesions seen in the areas defined on the MRI. Ultrasound examination of the prostate does not show whether the patient has cancer, imaging tests only confirm the suspicion, and a malignancy can only be confirmed with a biopsy.

The result of a tissue sample determines the direction in which further tests should be performed. In the case of a malignant tumor, the decision-making process related to the treatment takes place with the involvement of several specialists, the patients’ examination is led by the urologist and treatment is decided by summarizing the data, with the involvement of the oncology team: the urologist, oncologist, radiologist, radiotherapist, and pathologist determine the optimal therapy for the patient.

What are the chances of prostate cancer healing?

If we divide prostate tumors into four stages, the patient can be cured up to 100 percent in the first two stages, cured very well with individualized therapy in the third stage, and at stage four normal life can be prolonged.

What are the risk factors for developing the disease?

There are no well-described risk factors. Genetic factors can influence the development of the disease if, for example, the disease is cumulative in the family. Prostate cancer is more common in some ethnic groups.

Lifestyle and environmental factors play a role in the development of all cancers. As life expectancy in Western societies extends and there are an increasing number of older people, so the incidence of prostate cancer increases, as the older one is, the greater the risk of developing prostate cancer.

What can we do to prevent prostate cancer?

The biggest trouble is embarrassment, that we don’t talk openly. It is important to talk about the disease in the media, and about the benefits of participating in screening. We need to discuss the fact that late diagnosis makes treatment less likely to succeed and reduces chances of survival.