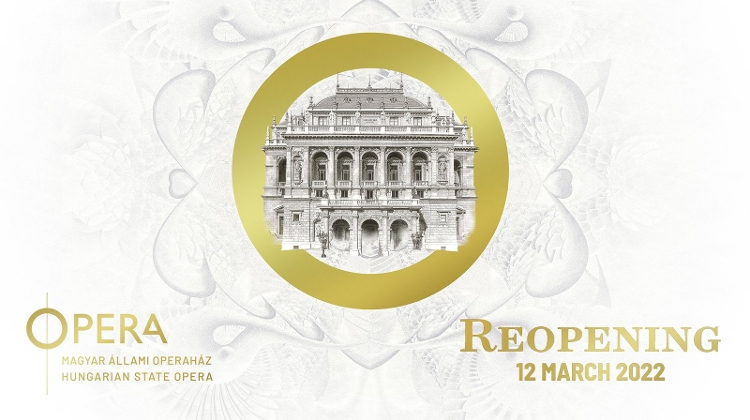 After the restoration work at the Budapest Opera House on Andrássy Avenue that lasted nearly five seasons, the moment everyone, including international audiences, have been waiting for is finally here.

Starting on 12 March 2022, the historic building restored to its original glory and augmented with the most modern technologies will not only be home to productions that have not been performed for quite some time, but successful performances of recent years will also take their worthy place at the Opera House, also known as the Ybl Palace after its architect, Miklós Ybl.

The Opera House opens its gates again with a three-day festival between 12 and 14 March 2022, beginning with an orchestral gala conducted by Plácido Domingo, Ádám Medveczky, Gergely Kesselyák and general music director Balázs Kocsár.

On 13 March, a new production of Hunyadi László by Ferenc Erkel is staged by general director Szilveszter Ókovács, making it his directorial debut.

Based on the piece’s original version, the performance will also demonstrate the artistic and technical virtuosity of the modernised stage machinery of the Opera House.

The Hungarian National Ballet also returns to the historic building with a new production of Kenneth MacMillan's lavish Mayerling on 14 March.

Wagner fans will have to add two new premieres to their calendars as later in the season a new Parsifal is presented by artistic director András Almási-Tóth, and Wagner's Ring-cycle also comes to and end with Götterdämmerung directed by Géza M. Tóth.

Apart from outstanding Hungarian soloists and conductors, programmes at the Opera House feature international guest stars such as Plácido Domingo as Simon Boccanegra, Erwin Schrott as Mefistofele, Matthew Polenzani as Don Carlo, and Sir Willard White as Bluebeard and Porgy. Stefan Soltész returns to conduct Die Frau ohne Schatten, whereas one of ballet’s most famous conductors, Paul Connelly is to work with the ballet ensemble in Onegin.

Tickets for March – June 2022 are available, for tickets and more information on the productions click on the titles above. For further ticket information contact the sales team: ticket@opera.hu.