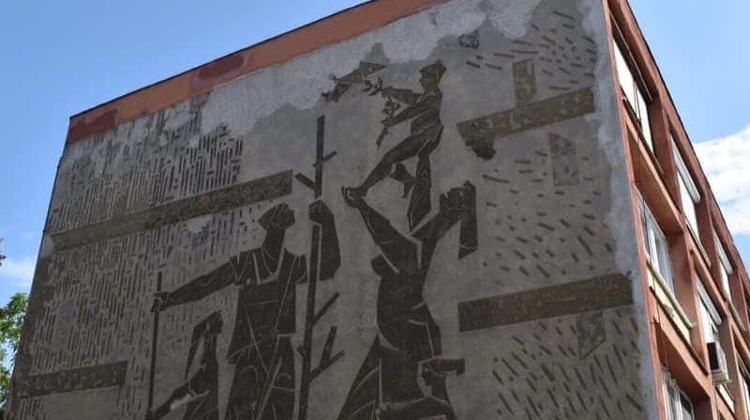 A quick stroll around the city centre is enough to see that Budapest is home to many an ambitious mural. The inner-city is heaving with bold designs splashed onto the sides of its larger buildings, bringing colour to otherwise blank facades or ornamenting walls recently-revealed by demolition.

Although many of the artworks are relatively recent, murals in Budapest are not a modern phenomenon.

During the communist era, public artworks such as murals and reliefs (images carved directly onto the stone or formed from concrete) were intended to inspire the proletariat, beautify identikit apartment blocks and idealise the regime’s values.

Over the years any large, blank space was seen as an opportunity to deliver a political message to the masses.

While the regime is long gone, many of the works remain – in various states of decline – clinging onto buildings in the far-flung districts of Budapest. 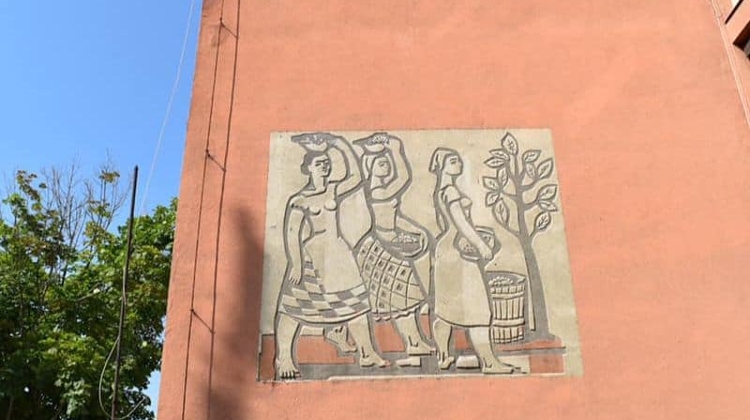 Socialist mural in Budapest - Relief from the communism

Those adventurous enough to hop on the number 30 bus from Heroes’ Square and venture up to Újpest will be rewarded by some of the best-preserved murals the capital has to offer.

At Szent László tér (not the one in District X – don’t repeat my mistake) you’ll find a cluster of five superb works within a few hundred metres of each other – perfect for a little urban photography outing.

The designs were completed in 1958 to decorate a new housing estate in the area and feature traditional socialist themes of family, harvest and labour.

They’re curiously free of graffiti and vandalism too, in contrast with the scrawled democracy of central Budapest’s walls.

This cluster is perfect for those seeking a bit of a treasure hunt.

As well as the examples pictured, there are other artworks hiding behind bushes and trees just waiting to be discovered. Although they’re usually in pretty poor shape, they’re still well worth seeking out as historical curiosities. 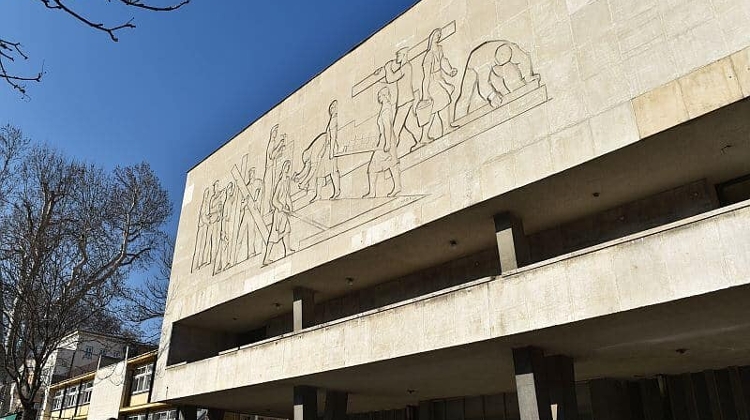 While many of the older murals around the city are falling prey to time and the elements, its robust concrete reliefs tend to age more gracefully. The HQ of the Mining, Energy and Industrial Workers’ Union (at 50 Városligeti fasor near City Park) is a well-preserved example of this boxy, angular form.

Created in 1949 at the height of the Socialist Realism movement, István Tar shows workers eagerly toiling in heroic, idealised poses – in contrast to the grim realities of occupied Hungary. The comrades – both men and women – are shown in an almost indistinguishable fashion, hammering home the values of community and collectivism over individuality.

Designs like this were imported from the Soviet Union and served to further institutionalise communism within Hungary. They soon became part of the “house style” of the regime and can be seen in smaller pockets throughout Budapest. 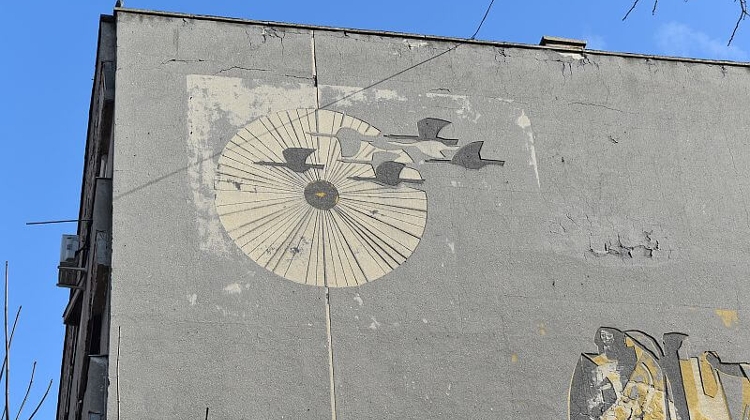 Not far from the Puskás Aréna (in District XIV) you can find these two 1963 works decorating the side of a former Ministry of the Interior building – built to house its employees. The two designs were the work of Andrea Michnay and István Petrilla, and were chosen as part of a city-wide competition.

Although the romanticised worker aesthetic is still present, these fading murals show broader aspects of utopia: a flock of cranes in front of a setting sun, families flying kites and playing together, all in the flat, hieroglyphic form often used in Socialist Realism art. The authorities were clearly keen to show that life under communism wasn’t all work work work. 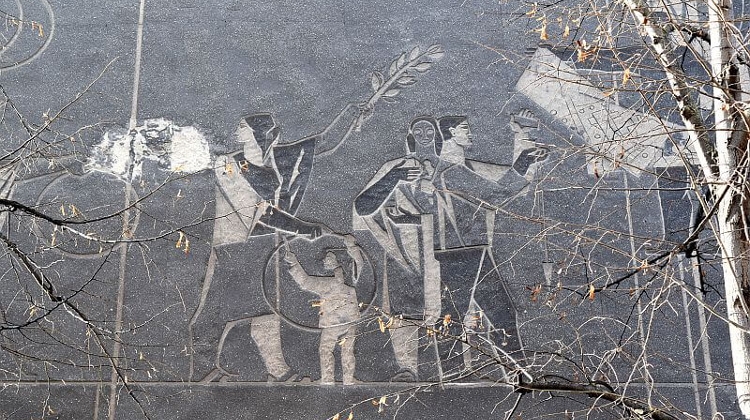 I was lucky enough to see these two in the depths of winter when the bare-limbed trees didn’t obscure them as much as they would in the spring – it’s always interesting to see how the changing seasons affect how we perceive Budapest’s art and architecture. You can find Michnay’s work at 11 Gizella út,  while Petrilla’s can be found around the corner at 18 Szobránc utca. 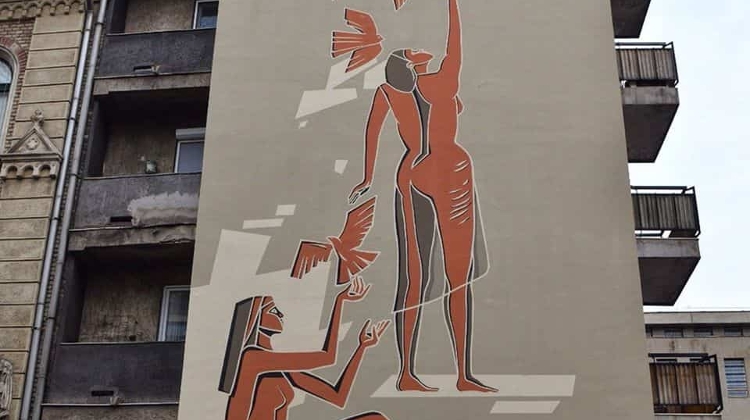 Finally, from the past to the future. Given the condition many of these historical murals are in, how should they be conserved for future generations – if at all?

One approach can be seen at 30 József utca in District VIII (close to the Harminckettesek tere stop on the 4/6 line). János Somogyi’s 1965 work, “Women with Pigeons” had practically disappeared through neglect and decay, but it’s now been reworked and refreshed by the Színes Város Csoport (Colourful City Group).

Based on the original design, the renewal enlarges and modernizes its deteriorated predecessor, in keeping with the inner-city’s more recent designs (many of which are created by the same group).

This approach has proved a little divisive, as the old mural has been completely obscured, but some feel it’s an interesting way to preserve the spirit of murals that are “circling the drain” in real terms.

With other works from the era disappearing at an increasing rate, this may be the only way future generations get to experience the street art of mid-20th Century Hungary.

Unlike the communist statues, which were relocated to Memento Park in the 90s, works like this either live or die in-situ. It’ll be interesting to see how many of them will be around in ten years’ time or whether the city sheds this period in its artistic and social history by simply doing nothing. The way I see it? Visit them while you still can.