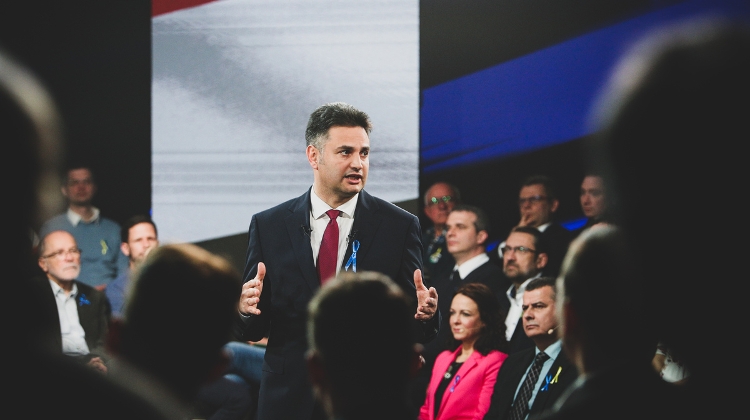 Border protection will be strengthened, an independent border guard will be set up, and a village guard program will be launched. Hungary will adopt the euro within five years, the minimum wage will be tax-free, and the amount given for maternal benefits, family allowance, and home care allowance will be doubled.

The 13-month pension benefit will be maintained, and pensions will be gradually increased, the opposition said at an event presenting its election platform on Wednesday evening, hosted by prime minister-designate Péter Márki-Zay.

Speakers at the event promised that the so-called workers’ “slave law” will be abolished, workers’ rights will be strengthened, and flexible retirement will be allowed.

Corruption will be eliminated, agency files will be made public, a fair electoral system will be devised, and a referendum will decide a new constitution. In addition, substantial pay raises will be given to health care workers, teachers, and police officers.

Waiting lists will be reduced, control over schools will be returned back to municipalities, state-run and church-run schools will get the same amount of funding, and free college will be given to those pursuing their first degree.

Equal access will be provided to sports and culture, the Roma will be offered a chance for real social advancement, a new climate law will be drafted, and the land will be given back to those who cultivate it.

Advancement, freedom, and Europe – this is why Hungarians have been fighting for some 150 years. - said Péter Márki-Zay, the opposition’s candidate for prime minister and mayor of Hódmezővásárhely.

Márki-Zay said that upon implementing the “Hungary Rising” platform, the nation must first break with Putin’s methods and the policies that assisted “efforts at world domination by war criminal Vladimir Putin.”

We will liberate culture, we will liberate the press, we will dissolve the Media Council, we will eradicate the propaganda of lies…. The love of power will soon be replaced by the power of love. - vowed the opposition leader and mayor of Hódmezővásárhely.

Details on the opposition’s platform were provided by politicians from each of the parties making up the joint coalition. In addition to joining the European Public Prosecutor’s Office, independent MP Ákos Hadházy spoke about the establishment of an Anti-Corruption Agency, and promised transparency in public procurement procedures and stronger market competition. He added that anti-corruption laws would apply to everyone.

Imre Komjáthi from MSZP said that those making the minimum wage would have their salaries tax-free through tax refunds, while the employment benefits period would be increased from three to nine months.

DK’s Gergely Arató vowed to “return education to the people,” stating that schools would be returned to local municipalities and an independent ministry of education would be set up.

Finally, LMP’S Erzsébet Schmuck emphasized the need for an “independent green ministry and a strong green authority” to reduce Hungary’s dependence on Russia for its energy needs. A “sustainable utility price cut” is a part of this, as well as a review of the Paks2 nuclear expansion project.