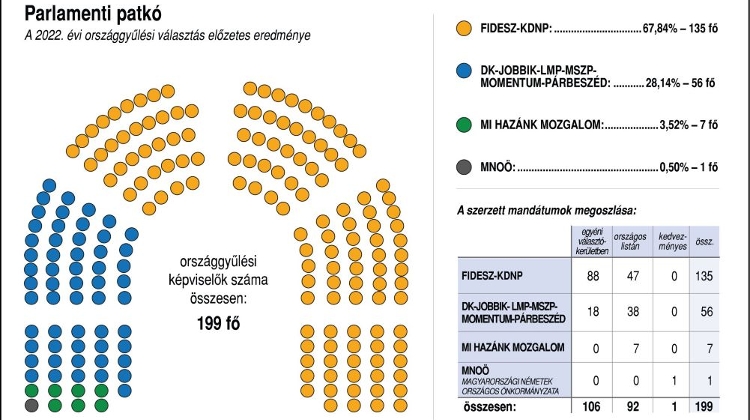 Left-liberal authors hope that the opposition can pull itself together after its hugely disappointing performance at the general election on 3 April, while pro-government commentators rejoice over what they consider the right choice of the majority of the electorate.

In Magyar Hang, Szabolcs Szerrető tries to soothe opposition voters. ‘This is not the end of the road’ he tells them. He admits that acting together was a huge challenge for the disparate forces of the opposition, but the electoral system with its ‘first past the post’ rule in the individual constituencies made it simply compulsory for the opposition to unite.

He thinks there was insufficient quality in leadership and a lack of simple welfare promises as well as of convincing messages in reaction to the war in Ukraine. The government will now, nevertheless, face huge tensions and difficulties, so he cautions against despair – ‘this is not the end of history’, he writes.

The editorial writer of 168 óra is more apocalyptic. Why is the opposition too big to fail, despite proving themselves totally inept? He asks. He accuses the leaders of the opposition parties of being satisfied with winning mandates in Parliament and therefore earning a comfortable salary.

Today’s opposition, he concludes, is the first roadblock on the path of bringing down the incumbent regime. He asks whether their presence in Parliament doesn’t merely serve to legitimise the system they were supposed to bring down.

In Jelen, editor Zoltán Lakner also asks whether elected opposition MPs should sit in Parliament without any chance of influencing legislation, given the crushing pro-government majority there. He wonders what other tools and means are available for the opposition to reorganise itself and be visible to society, once it decides that it is useless to assist what he defines as a mere semblance of democracy.

In an otherwise angry editorial, Magyar Narancs warns that it makes no sense for the opposition to boycott Parliament, the opposition benches provide an important platform to argue in public against the government. The opposition must continue to be present in public life and wait until the opportunity arises to win over the majority of the population, the editors conclude.

In a similar vein, Heti Világgazdaság’s Árpád W. Tóta calls on the opposition to consider its 1.8 million voters as a precious basis to continue its work. Sure, he continues, the government has almost a million supporters more, but the liberal author cautions his readers against despising them as ignorant rednecks.

They simply saw in Prime Minister Orbán the lesser evil, he explains. The opposition’s job, he argues, is not to reject them but to win them over.

In Élet és Irodalom, János Széky lambasts the opposition for showing such timidity over the war in Ukraine. Responding to the government’s stance that Hungary should stay out of the war, they should have chosen what he sees as the only moral path and demand lethal weapon shipments to Ukraine.

They would have lost the elections anyway, but at least they could now say that they were honest, he fulminates.

On the pro-government side, Demokrata editor-in-chief András Bencsik urges his fellow conservatives to win over Budapest, after winning an overwhelming majority in the rest of the country. The elections, he explains, have revealed a gaping chasm between Budapest and rural Hungary. In his view, the people of the capital act as if they were a mass of aliens in their own country.

He believes most dwellers of the capital city put their interests first, suppressing their patriotic emotions, but that could be changed, he hopes.

Mandiner’s Dávid Kacsoh points out that the government side won the elections by a landslide for the fourth consecutive time despite having had to face unexpected hardships this time. First Hungary, just as other countries, was hit by the Covid pandemic and then by the reverberations of the war in Ukraine.

Despite all that, the opposition was unable to even hold its earlier positions – proof of their poor quality, he suggests. He admits however, that the country would actually benefit from an intellectually and morally strong opposition.