Hungarian Opinion: Weeklies on the Elections – With Two Weeks’ Hindsight 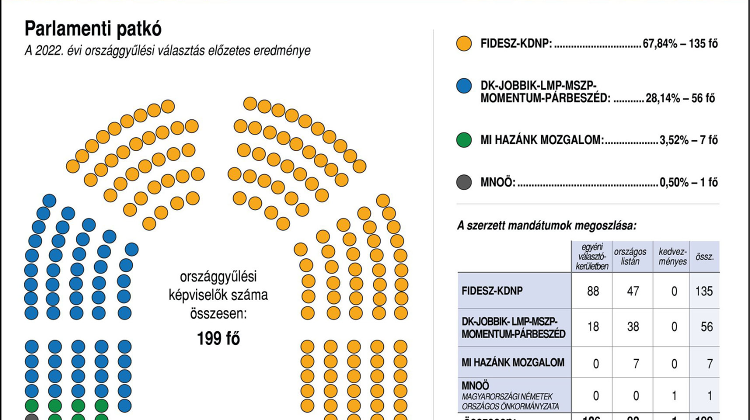 Commentators still struggle to find consistent explanations for the fourth consecutive electoral victory of Fidesz on 3 April. There is even less clarity, however, on how the opposition can recover from its latest defeat.

In Demokrata Gábor Bencsik, an expert on the history of Hungarian Roma, who is a regular contributor to the weekly, which is edited by his brother András, analyses why Prime Minister Orbán’s party was supported by the overwhelming majority of Roma voters.

In fact, pro-government votes were proportional to the share of the Gypsy population in any given settlement, he remarks. The main reason, he suggests, is that under the Fidesz government, Roma people living in segregated communities with very scarce job opportunities were offered modestly paid work in public works throughout the country.

In Élet és Irodalom, editor Zoltán Kovács suspects sheer cynicism behind Bencsik’s remark. What prevented him from noticing this for so many years before the elections? He asks.

In a long analysis of the causes of the result of the elections in Magyar Narancs, former left-wing finance minister Csaba László writes that Hungary is not a classical Western-type democracy although nor is it an aggressive Putin-style dictatorship. Further reasons he mentions include a clientelist system around the government, a perfect system of political populism, a professionally targeted electoral campaign and as well as the impact of the war in Ukraine.

In Hetek, an author who signs with the initials M.M-R thinks the opposition campaign was run by intellectuals living in Budapest who live in an opinion bubble and do not understand the lives and concerns of the people outside or, for that matter, inside the capital either.

Ordinary Hungarians suffered a shock after the regime change that brought about an existential and value crisis for many. Their first concern, therefore, is security and they found that the government was offering more of that than the opposition.

In his Mandiner editorial, Gergely Szilvay also finds those intellectuals active in politics ignorant of the nature of political competition. They incessantly complain about negative campaigning and have a tendency to demand a government of experts, he writes.

He interprets that tendency as intellectuals having a problem with democracy itself, because in a democratic system of competing forces everything becomes politicised, with experts also divided on policy issues. Intellectuals want to dominate politics and are dissatisfied when the political world doesn’t obey them, he suggests.

An unsigned editorial on 168 óra complains that the opposition parties refused to allot a seat in Parliament to Bernadett Szél, one of the most active opposition MPs in the previous Parliament.

She lost the election in her individual constituency but as she was on the opposition electoral list, could become a member of Parliament if only the parties agreed to choose her instead of the various unknown candidates they have proposed to take over the mandate of the opposition frontrunner Péter Márki-Zay who chose to keep his post as mayor of Hódmezővásárhely.

In a similar vein, Jelen’s editorial finds it disheartening that the disparate forces of the opposition are engaging in bitter infighting after the elections. The editors believe that is a bad start for the opposition, which should now be working on building a new movement on the basis of the 34 percent that voted for them on 3 April.

In Magyar Hang, Róbert Puzsér believes the opposition should now work on uniting its six parties in order to defeat the incumbent government in four years’ time. Their positions are stronger than Viktor Orbán’s were in 1994 when he started building a new right-wing alliance.

In fact, the left-liberal side can now easily reach the public, especially through Internet news sites and the social media, he suggests. In addition, they also have some support from entrepreneurs as well as from mainstream European political forces. Finally, Puzsér believes the intellectual world supporting the opposition is of much higher quality than that on the government side.

In an interview with Heti Világgazdaság, radical right-wing leader László Toroczkai denies any racist tendencies. The chairman of Our Homeland (Mi Hazánk), a party founded by former Jobbik members that won six seats in Parliament admits that individual members may be privately racist, but he has told them that such discourse is not accepted within his party.