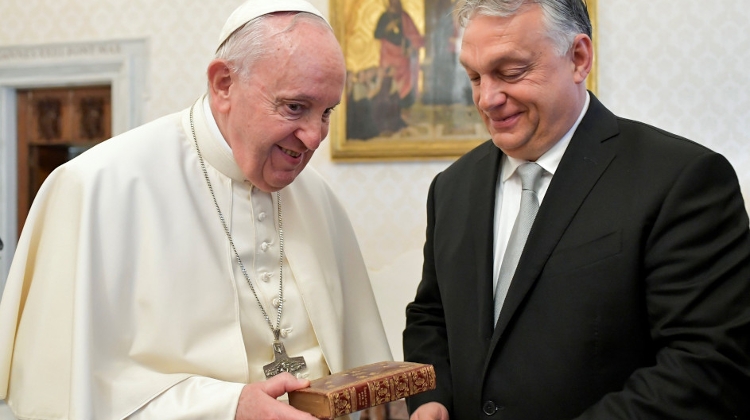 Prime Minister Viktor Orbán said that when it came to the Vatican, a country did not have a political relationship but a spiritual one. The Vatican and the Hungarian state both agree on the importance of the family, he added

“All of us here in Rome, in the Vatican and in Budapest think that the family is the most important community of our times. The last refuge and the safest habour for man in this modern world is the family, he said. This is why we must mobilise all our efforts to protect and strengthen this most important human community in our modern age, and we can count on the Holy Father in this endeavour,” Orbán said.

After meeting Pope Francis for a private audience on Thursday, Viktor Orbán said both Hungary and the Vatican supported efforts towards securing the swiftest possible resolution to the war in Ukraine.

Speaking in Rome, his first foreign port of call after the recent general election, the prime minister noted the pontiff’s well-known efforts to promote peace, and said his visit was freighted with special significance in light of the war in Ukraine.

Hungary, too, strives for the swiftest possible peaceful resolution to the conflict, he said, adding that Hungary had so far received the largest number of people fleeing the war — including non-Ukrainian students — in proportion of its population, numbering 640,000 refugees.

“We are conducting the largest humanitarian operation of all time, for which we are receiving recognition and respect the world over,” Orbán said. He said the pope made reference to this and “encouraged us not to give up this good habit of ours”.

Orbán said he had formally invited Pope Francis to pay an official visit to Hungary next year, adding that he had received “an encouraging response”.