Hungary Elections Were in Order but Concerns Remain, Says Justice Commissioner of EU 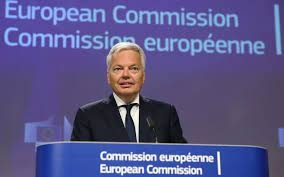 The parliamentary elections in Hungary in April were conducted in order, with voters given distinct alternatives to participate in a democratic procedure, but the European Union’s concerns, especially with regard to a biased media and non-transparent campaign financing have remained, Didier Reynders, justice commissioner of the EU, said late on Monday, citing a preliminary report by election observers of the Organisation for Cooperation and Security in Europe.

Speaking after a conference of EU affairs ministers, the commissioner noted concerns about the independence of Hungary’s media authority, whose members were delegated by ruling Fidesz.

He also noted that the Hungarian Media Council had refused to renew the licence of Klub Rádió, which was subject to an ongoing EU infringement procedure.

Reynders welcomed that Hungarian judges and prosecutors had received a pay rise, as well as a new law ensuring compensation for delays in civil procedures.

Reynders said he “could not report any positive developments” concerning the state of the rule of law in Hungary, but stressed that the European Commission was ready to continue cooperation with the Hungarian authorities to address the issues raised.