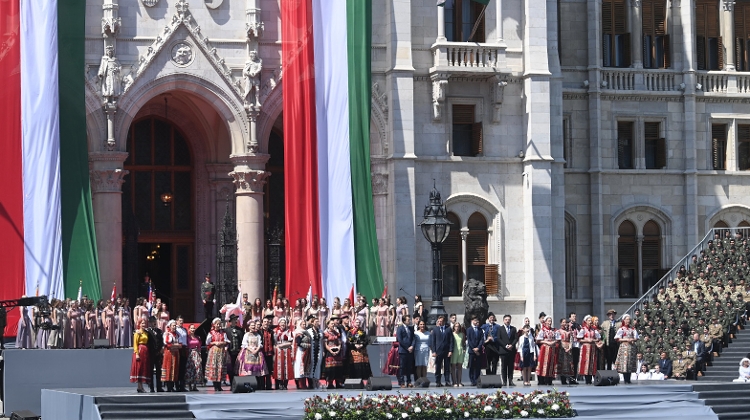 Katalin Novák was inaugurated as Hungary’s new president in a ceremony in front of Parliament on Saturday. In her inaugural address, Novák underscored her responsibility to show the country what her homeland and compatriots meant to her and to express her views “on our shared life and place in the world”.

“We are here together in the heart of Europe, the nation’s capital, the middle of the Carpathian Basin, in the nation’s main public square, but we are also together in our intent and desire to create a brighter, more peaceful, richer and more secure life for Hungarians in the 21st century after the decades that led up to the moral crisis of the 20th century,” the president said.

Novák said the war in Ukraine had cast a shadow over the lives of Hungarians. The initial shock that came from the attack on Ukraine had to be followed by immediate but well-thought-out long-term responses from Hungary as well, she said.

When the first groups of refugees arrived in Hungary on February 25, Hungarians rushed to their aid without hesitation, she added.

Since then, some 700,000 refugees have crossed into Hungary, Novák said, adding that Hungarians had collected hundreds of millions of forints’ worth of donations, provided care for the wounded, sent food to those who stayed home and provided shelter, food, jobs and schooling for families.

Hungary passed the test in humanity with flying colours, she said, adding that the country also needed to know what its response was to the war and what its interests were.

Condemning Russia’s aggression, Novák said Hungary would “forever say no to any ambition to restore the Soviet Union”. Hungarians want peace, she said, demanding an investigation into and punishment of war crimes. Hungary is not neutral, Novák said, adding that “we stand on the side of the innocent victims and justice.”

Hungary fulfils its obligations stemming from its membership in the European Union and NATO, she said. Hungary will not give up its sovereignty and supports Ukraine joining the community of European countries, she said.

Hungary is prepared to make sacrifices for peace and does not block its allies from making sacrifices, either, but it will not agree to decisions that demand sacrifices from Hungarians that are greater than the amount of pain they would inflict on Russia, Novák said.

The president offered to mediate in the interest of the resumption of peace talks between Russia and Ukraine, and expressed her support for the interests of Ukraine’s ethnic Hungarian community.

Novák vowed to work to ensure that Hungarians are understood and respected, saying it was a testament to the work done over the past decade that Hungarians could again “live with their heads held high” and could view the world looking out for Hungarian interests.

“Hungarian self-confidence, identity and national pride — which had been lacking for a long time — have returned.” “Let’s preserve and safeguard our national pride and make sure that national pride does not become national arrogance, but that it does not turn into globalist cowardice, either,” she said.

Novák said that as a citizen of Hungary, she expects those in charge of the executive branch to preserve the security of the Hungarian people. Novák said that as president she would strengthen Hungarians in the values based on Christianity, encourage them to have children and raise them in loving homes, support the protection of conceived human life and families and encourage them to respect each other and defend the weak.

She vowed to speak out in favour of helping young people start families, raise their children and take care of the elderly. “Let’s protect the order of creation and the created world,” Novák said, underlining the importance of supporting large families, stay-at-home parents, adoptive parents and single parents.

Saturday’s ceremony was attended by Prime Minister Viktor Orbán, Speaker of Parliament László Kövér and other senior officials. Novák was elected head of state by parliament on March 10. She is the sixth president since the 1989/90 change of political system.