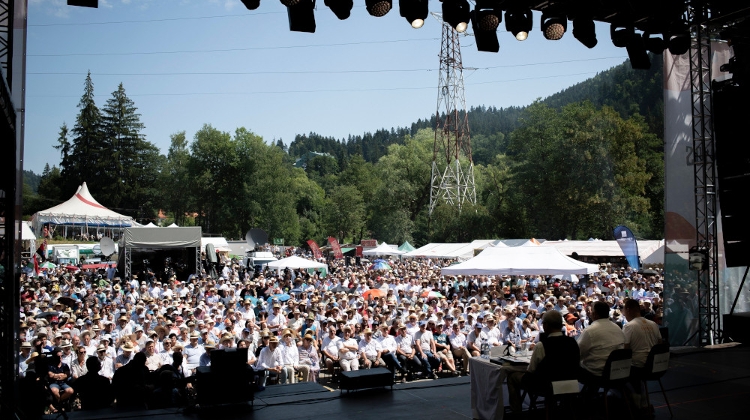 A pro-government commentator praises the Prime Minister for his endeavour to preserve Hungary as a distinct nation among others, while a left-wing pundit describes Mr Orbán’s speech as inconsistent.

After two years of ‘Covid absence’, Prime Minister Viktor Orbán delivered his customary annual speech at Fidesz’s Băile Tușnad “summer university’ on Saturday. He hoped Hungary would be ‘a local exception’ in a world in recession.

He asked other countries not to impose their gender ideology on Hungary and promised to resist mass immigration from outside Europe. His remark that ‘we don’t want to become a mixed race’ has stirred strong reactions among critics who accused him of using Nazi language. He also said that sanctions on Russia will not end the war in Ukraine.

The Prime Minister said he is convinced that Hungary will eventually reach an agreement with the European Union (on disbursing the funds allotted to Hungary but frozen on account of rule of law considerations.)

In Magyar Nemzet, Levente Sitkei interprets the Prime Minister’s address as one centred around the issue of nationhood, in opposition to a drive to amalgamate all nations into ‘one grey, indistinguishable mass’.

He rejects a culture of political correctness whose pundits do not hesitate to call the defenders of nationhood ‘Nazis’. Hungary, Sitkei continues, is not entitled to tell others what road to follow but ‘should keep itself clean, moral and democratic’, rather than seeking to conform to passing fashions hoping to win ‘the approving smiles of powerful people’.

Népszava’s Péter Németh describes Mr Orbán’s speech as offering ‘ridiculous conclusions’. The main problem, he writes, may be ‘not so much some Nazi ideas’.

Németh accuses Mr Orbán of putting forward ‘outlandish ideas’, when saying that by 2030 Hungary will be a net contributor to the EU budget and thus, among those who ‘dictate the music’ in the European Union or that the war in Ukraine would come to an end if Donald Trump were to be re-elected President of the United States in 2024.