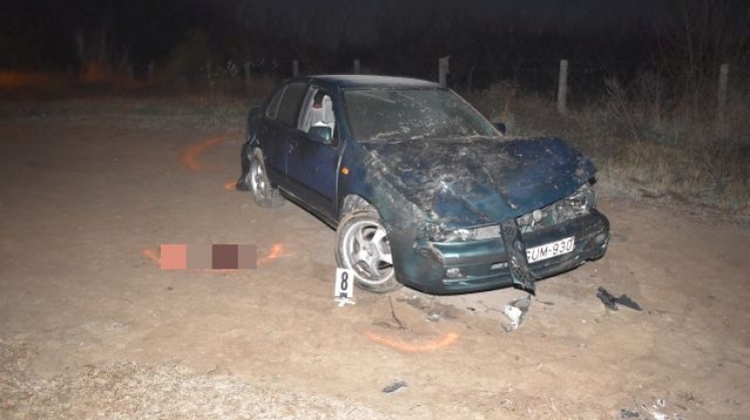 Three people died and eleven were injured in an accident caused by a human smuggler near Bócsa, in southern Hungary, early on Friday, the Bács-Kiskun County police said on police.hu.

A man from Georgia wanted to smuggle fifteen people through Hungary in a car and refused to stop for a police road check in Tázlár, trying to flee by driving away.

He did not slow down approaching a junction on road 54 and failed to give way to a vehicle approaching from the right.

Both cars fell in a roadside ditch from the collision and caught fire.

Two of the illegal migrants travelling with the human smuggler died in the fire on the spot and a third died after being taken to hospital.

The driver from Georgia is being investigated for human smuggling and careless driving causing a mass accident.

Hungary is setting up its new border ranger units because it is seeing more and more people smugglers at its borders who are becoming increasingly aggressive, a state secretary of the interior ministry said on Friday.

Altogether 10% of Hungary’s 19,000 prison inmates, or some 2,000 people, are foreign people smugglers, Bence Rétvári told public current affairs channel M1, adding that their share was over 20% in the prison in Szeged, in southern Hungary.

Because the handling of people smugglers — most of whom are Bulgarian, Serbian, Macedonian and Middle Eastern — requires the authorities to perform a range of additional administrative tasks, they cost the budget an extra 4 billion forints (EUR 10.1m) a month, Rétvári said.

Illegal migration into Hungary has not slowed despite the war in Ukraine, the state secretary said, adding that more and more people smugglers were reaching the country and becoming increasingly aggressive.

The authorities have apprehended 999 people smugglers so far this year, as against 600 by mid-summer 2015 during the first large migration wave, he added.