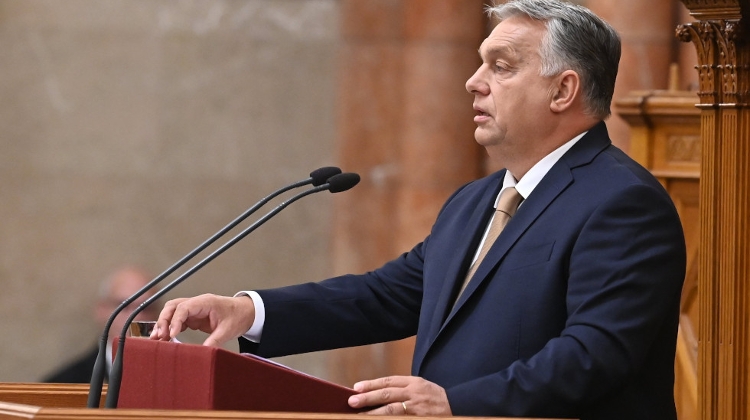 The country’s gas reserves cover 41% of annual consumption, and the government has agreed with Russia on further deliveries, he added.

As Hungary covers 85% of its gas consumption from imports, and the government is not in a position to influence prices, consumption must be reduced, the prime minister, calling on government agencies, state-owned companies, institutions, families and businesses to use less natural gas, which makes up 35% in Hungary’s energy consumption; to be reduced to 31% by late 2023 and to below 30% by 2025.

He noted that the government has taken measures to boost domestic gas extraction, restart the lignite-based Mátrai power plant, extend the lifespan of the Paks nuclear power plant and start the construction of a further two blocks there. Hungary’s household energy subsidies are the most generous in Europe, the prime minister said.

Energy subsidies in Hungary will come to 30% of a household’s average monthly income, as against 20% in Germany and 6% in Austria, the prime minister said. Hungary’s government has also launched a 200 billion forint programme to support small and medium-sized businesses with high energy needs, and it is drafting a “factory-saving” scheme and a new action plan to prevent job losses, he said.

Ongoing investments in Hungary are worth 9,400 billion forints, Orbán said. While these will be concluded, the government will not launch further investments because there is no guarantee they would be completed, he added.

Hungary is stronger today than at any time since the collapse of the communist regime, Orbán declared.

While sanctions have damaged the country, the government may succeed in ensuring that Hungary emerges from the crisis even stronger, he added. The government will “set a quick pace” in the months to come, the prime minister said.

Not even in the forthcoming two-year period of crisis management will the government relinquish its national strategy objectives, Orbán said.

It will continue to develop the transport network, maintain family support schemes, establish an innovation-based economy, develop universities, upgrade the armed forces and carry out its programme of national unification, he added.

Orbán also pledged to further develop the family support system, adding that 2023 state budget to be finalised by early December would contain the relevant measures. Orbán emphasised that despite ongoing disputes with Brussels, Hungary still saw its future in the European Union.

'National Consultation' Will Survey Opinion in Hungary about Sanctions on Russia