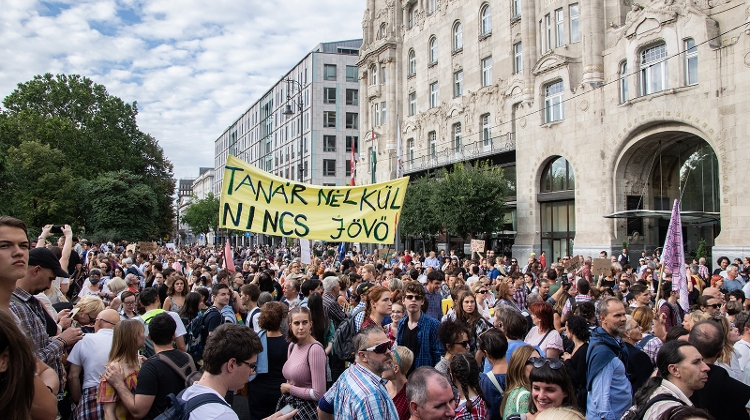 Along with continuing the rolling strike, we will regularly designate days in which we call for a national work stoppage for workers in education.

For the first of these, we announce a nationwide, unified strike on October 5, 2022 – World Education Day.

We ask those working in kindergartens, schools, dormitories, and as specialists not to work on this day. - the Democratic Union of Teachers’ (PDSZ) wrote in a call to action at the September 23 meeting of its National Election Committee.

They write that the strike must be announced to the head of the institution by 4:00pm on Wednesday, September 27 at the latest, and the expected number and names of strikers must be submitted by 4:00pm on the 29th. Workers in other industries are also asked to organize similar solidarity protests on this day.

Also on October 5, the joint delegations of PDSZ and the Teachers Union (PSZ) will visit the offices of the Commissioner of Fundamental Rights in Budapest, Győr, Miskolc, and Pécs to hand over their collected complaints to the office.

The offices in Debrecen, Székesfehérvár, and Szeged will be visited on the previous day – October 4th – as there is no customer service at these locations on Wednesday.

At 5:00pm, the “Bridge Occupation for the Teachers” event, organized by students, will be held at Jászai Mari Square. From there, the protestors will march to Kossuth Square at 7:00pm for a solidarity concert organized by the Tanítanék Movement and noÁr.