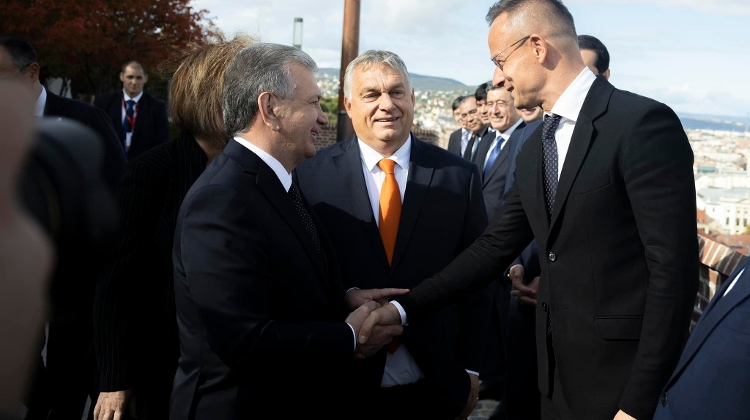 At the talks held at the Castle District premises of the Prime Minister’s Office, Orbán said Hungary considers Uzbekistan a crucially important partner in the Central Asian region.

Cooperation between the two countries is of strategic importance from a political, security, economic and energy standpoint, Bertalan Havasi cited the prime minister as saying.

The two leaders were in agreement that economic cooperation between Hungary and Uzbekistan was more intense than at any other time in the past, highlighting the role of the Hungarian-Uzbek Business Council.

The talks also touched on Hungary offering one year of training to ten Uzbek university students in the field of nuclear energy as part of the Stipendium Hungaricum scheme with a view to promoting nuclear cooperation between the two countries.

Orbán accepted the Uzbek president’s invitation to the Organization of Turkic States summit to be held in Samarkand next month. Hungary and Uzbekistan signed 14 agreements during Tuesday’s talks, including one on the advancement of their strategic partnership, as well as agreements on cooperation in the areas of health care, environmental protection, sports and agriculture.

Hungary is “highly likely” to provide the cooling technology for Uzbekistan’s new nuclear plant, a model especially useful in places like the site of the new plant where water is scarce, Szijjártó told a press conference after the talks.

Hungary will also provide training for Uzbek nuclear experts as part of its grants scheme for 170 Uzbek students wishing to study in the country, the ministry cited Szijjártó as saying.

The two countries will also launch an R&D project focusing on fuel rods, he said, noting that Uzbekistan is the seventh largest Uranium producer in the world. “In the current energy crisis, capacity to produce nuclear energy has become extremely valuable; Europe won’t have secure energy supply or affordable energy without nuclear energy,” Szijjártó said.

Meanwhile, Hungary’s government sees the stability of Central Asia as an important aspect of European security, and Uzbekistan has a key role in this, he said. He noted the challenges plaguing the region such as migration waves originating in Afghanistan.

The region is also considered a hotbed of international terrorism, he said. “If we manage to stop these dangerous trends in Central Asia, the security of Europe will improve; something the continent is in dire need of,” he said.