Watch: Tens of Thousands of Protestors in Budapest March for Education On October 23 National Holiday 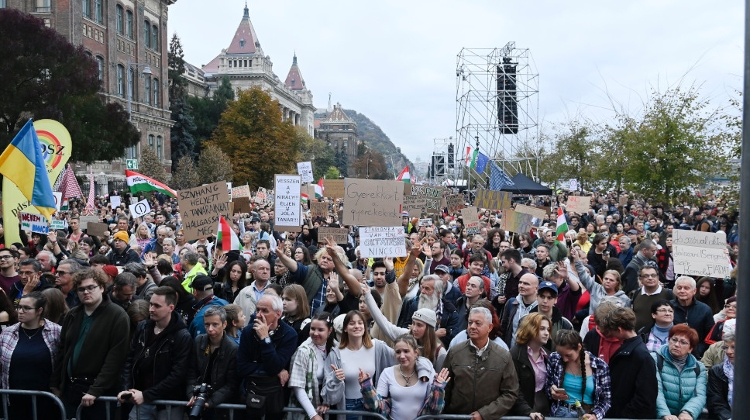 On Sunday, Hungary’s October 23 national holiday, the Democratic Trade Union of Teachers (PDSZ) and the ADOM Student Movement jointly organized an event in Budapest titled “Solidarity Demonstration for Our Teachers.”

The demonstrators marched from Calvin Square to the Technical University Embankment, crossing the Danube over the Freedom Bridge.

Representatives of various teaching associations and civic organizations were among those who spoke at the event. Unlike previous events, this time they were joined by a politician, Budapest Mayor Gergely Karácsony, who gave a short speech.

The crowd departed from Calvin Square at 4:15pm, loudly whistling and chanting slogans like “We’ve had enough” and “Free country, free education!” Organizers estimated that as many as 80,000 people protested on both sides of the Danube and on the bridge.

Speaking at the event, Erzsébet Nagy of PDSZ summarized activities in support of teachers in recent days: 147 events, in 61 cities, in front of 41 school district centers. “We are taking an unprecedented stand,” she said, noting that they were not only demonstrating for higher wages and a reduced workload, but also against illegal coercion from employers.

Hungary’s political parties did not take part in Sunday’s demonstration, and with the exception of Our Homeland, none of the opposition parties organized any events for the country’s national holiday in order to keep the focus on the teachers’ demonstration.

Ruling party Fidesz did not hold a commemoration event in Budapest. Prime Minister Viktor Orbán gave a closed speech far from the capital, in the western city of Zalaegerszeg, instead of the usual rally in Budapest.

There have been continuous demonstrations for education since March, but these events have been more fired up since the end of September, when several teachers from Ferenc Kölcsey High School who expressed “civil disobedience” over restricting the right to strike and the situation of the schools were fired.

On October 5, some 40,000-45,000 people protested on Kossuth Square, and more than 10,000 people took part in a student-led demonstration on October 14. The government has so far not negotiated with the protesters, but has promised a salary increase several years from now, which both teachers and students consider unacceptable.