Central Bank Keeps Base Rate at 13% 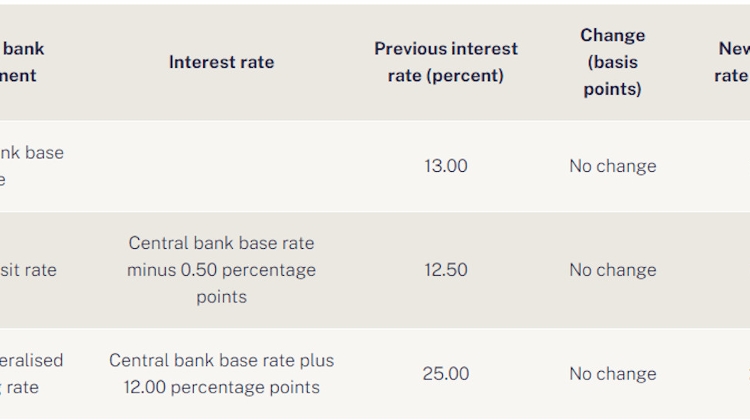 Hungarian rate-setters left the base rate on hold at 13% at a regular policy meeting. The Council also decided on Tuesday to keep the central bank’s O/N deposit rate at 12.50% and the O/N collateralised loan rate at 25%.

The base rate is paid on mandatory reserves. The rate-setters had signalled an end to the tightening cycle at their monthly policy meeting in September, but said tight monetary conditions would be maintained with a focus on sterilising liquidity and improving monetary policy transmission.

On October 14, the policymakers announced a decision to launch O/N deposit tenders on a daily basis. The central bank has since offered the liquidity sterilisation instrument at a rate of 18%.

In a statement released after the meeting, the Council said tight monetary conditions will be maintained over a prolonged period, adding that this would “ensure that inflation expectations are anchored, and the inflation target is achieved in a sustainable manner”.

The central bank is focusing on sustained shifts in financial market conditions, and will use the instruments introduced last month until a trend improvement in risk perceptions occurs, the Council said. It added that the central bank directly meets major foreign currency liquidity needs that arise from covering net energy imports till the end of the year.

Looking ahead, the National Bank of Hungary also takes into account considerations regarding the adequacy of foreign currency reserves, the Council said. It said that in recent months, the economy had begun to adjust to the energy market through a decline in energy consumption.

This, along with a fall in energy prices, allows for balance in the foreign exchange market to be maintained by providing less foreign currency liquidity than earlier expected, the Council said.

To “further increase the effectiveness of monetary policy transmission” the central bank will hold a two-month deposit tender, at the end of November, to tie up banking sector liquidity over a longer term, and hold additional FX swap tenders providing euro liquidity as well as discount bill auctions in December, the Council said.

At a press conference following the meeting, deputy governor Barnabás Virág said external and internal factors pointed to a turnaround in inflation in Q1 2023, but that turnaround will be “drawn out and very gradual”.

A meaningful drop could be seen in the second half of 2023, he added.