Italian Cuisine Festival in Budapest on Until 20 November 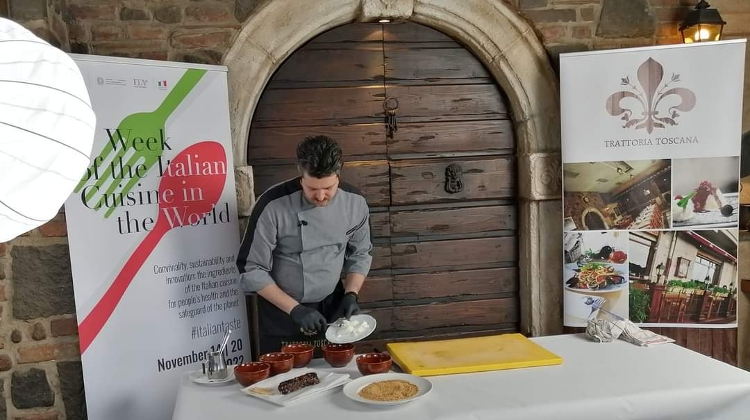 Cooking shows, master classes, workshops, film screenings and several other programmes will be offered at the Italian gastronomy festival in Budapest between November 14 and 20, the Italian ambassador said.

Organised every year since 2016, the festival this year will focus on communities, sustainability and innovation, highlighting that Italian specialties are healthy as well as delicious, Manuel Jacoangeli told a press conference.

Gabriele La Posta, director of the Italian Cultural Institute, said that the festival will give special attention to Roman kitchen, noting Rome’s candidacy to host the 2030 World Expo.

The cultural institute will host a screening of the documentary Florence, Central Market, accompanied by a gastronomy show on Tuesday evening.

Giovanna Chiappini Carpena, the director of the Italian Foreign Trade Institute’s Budapest office, said Master Confectioner Angelo Gala will give a workshop on Thursday and Friday.

For the Week of Italian cuisine in the world, we prepared the the specialities of the Roman cuisine!

Roman gastronomy is woven through thousands of years of traditions, from the pastoral traditions of the surrounding countryside to the Roman Jewish community.

Despite - or because of - Rome's perpetual prosperity and abundance, the city "brings" one of the world's most ordinary cuisines: humble and cheap, it uses simple techniques to emphasize the available and seasonal flavors.

Just because a dish is a classic doesn't mean it's out of style! Many Romans still go for roasted artichokes and cacio e pepe on a Saturday night, not because they still live as impoverished shepherds, but because they love these classic dishes!

Be a Roman for an evening, visit us and taste our specially composed menu for this shape!

The full programme of the festival is available here:
http://www.italianfestival.eu/olasz-gasztronomiai-vilaghet/.