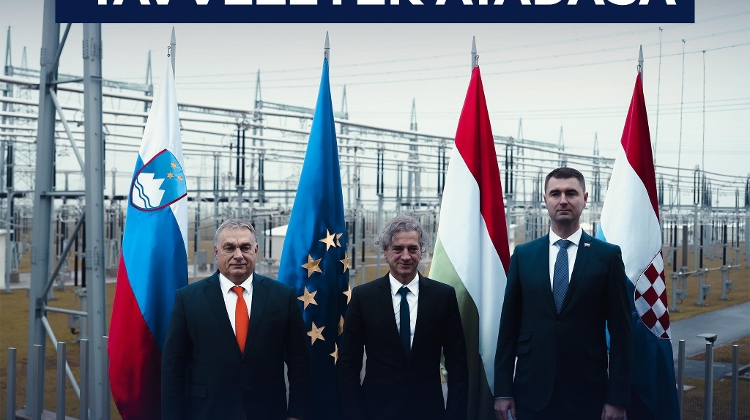 The linking of Hungary and Slovenia's energy infrastructures is a symbol of the two peoples' hope for the future, Prime Minister Viktor Orbán said at a ceremony marking completion of the construction of the cross-border Cirkovce-Pince electrical transmission line, in Slovenia's Cirkovce.

Hungarians and the peoples living in the territory of the former Yugoslavia used to be cut off from each other, the prime minister said. Hungarians therefore built all of their links in an East-West context, whether it be gas, oil or electricity, he added.

This separation remained after the breakup of Yugoslavia, making Slovenia the only one of Hungary’s neighbours with whom it had not had its gas, oil or electrical grids linked, Orbán added.

He noted that it was his first government in 1999 which had extended the power transmission line to the border and linked it with Croatia’s network.

Orbán thanked the Slovenian governments that had helped link the transmission lines and the Slovenian people who had supported the project. He said Hungary needed to do everything in order to link the remaining energy infrastructures with Slovenia.

Orbán said he believed central Europe had a bright future ahead of it. “Though we speak different languages, our life instincts bind us together,” Orbán said.

Hungary and Slovenia are also connected by the fact that they both view the minority communities in each other’s countries as assets, Orbán said. Support for the ethnic Slovene community in Hungary has risen six-fold since the Fidesz-Christian Democrat alliance came into power in 2010, and Slovenia also sees ethnic Hungarians living in its territory as assets, he added.

Answering a question, the prime minister said the aim of the cooperation between Serbia, Austria and Hungary was to jointly protect their borders against migration, adding that they welcomed help from other countries, too, including Slovenia. This, he said, would boost the protection of Europe’s external borders and push effective border control as far south as possible.

As regards plans for a Slovenian-Hungarian natural gas pipeline, Orbán said the two countries were in agreement on the need to link their gas networks. Hungary has a larger-capacity pipeline in mind, while Slovenia wants to start smaller before increasing capacity, he said. This can be resolved, as Hungary can accept starting out with a smaller-capacity pipeline, he added.

Meanwhile, Orbán said Hungary can look to Romania, Croatia and Slovenia if it wants to further reduce its dependence on Russian energy.

Hungary is interested in all three directions because it wants to end its dependence and wants as many options as possible. The prime minister added that he was prepared for pragmatic cooperation with his Slovenian counterpart.

Asked about energy exchange prices, Orbán said that though unlike Slovenia, Hungary imports most of its energy from Russia, the prices on the energy exchange also impact energy prices in Hungary through the agreement signed with Russia.