The Centrál Coffee House was opened in 1887, and was the center of various Hungarian literature and scientific streams throughout the 19thand 20thcentury.

Between 1890 and 1945, well-known writers, poets and protectors gathered here to edit literary journals, and it was an important meeting point for scientists, composers and artists, as well.

From 1953, after the reconstruction done after the II World War, it continued its hospitality, and became a canteen for university students, as well as a night-time student club, venue for entertainment and concerts.

This coffee house redolent with age reopened in 2000, to resume its significant spot in Budapest and in gastronomy. The mission of the renewed and reopened Central Coffee House is to deservedly continue the life its ancestor, the historic Centrál Coffee House opened in 1887. It accomplishes the double role of a coffee house: a popular catering spot of great quality, as well as venue for social and cultural programs.

The 132-year-old Centrál Coffee House wishes to recreate the atmosphere of an era which everyone refers to as the golden age of Hungarian gastronomy. The traditions of these years are immortal and live on in the taste and flavour of our dishes up to this day.

Deák St. Kitchen is a wine and grill restaurant, focused on blending local, seasonal ingredients and international influences. Beside the delicious selection of meals, there’s a big focus on local wines both from established Hungarian winemakers as well as smaller, innovative wineries.

DSK also focuses on craft cocktails, and with live entertainment on selected days, it is the perfect place not just to celebrate special occasions, but to stop by any time of the day for a drink or a great meal. The restaurant tempts with an exquisite lunch break in the heart of the city, by appetizing two or three course, weekly changing menu options.

Kitchen:
Sunday to Wednesday: Until 10 pm
Thursday to Saturday: Until 11 pm 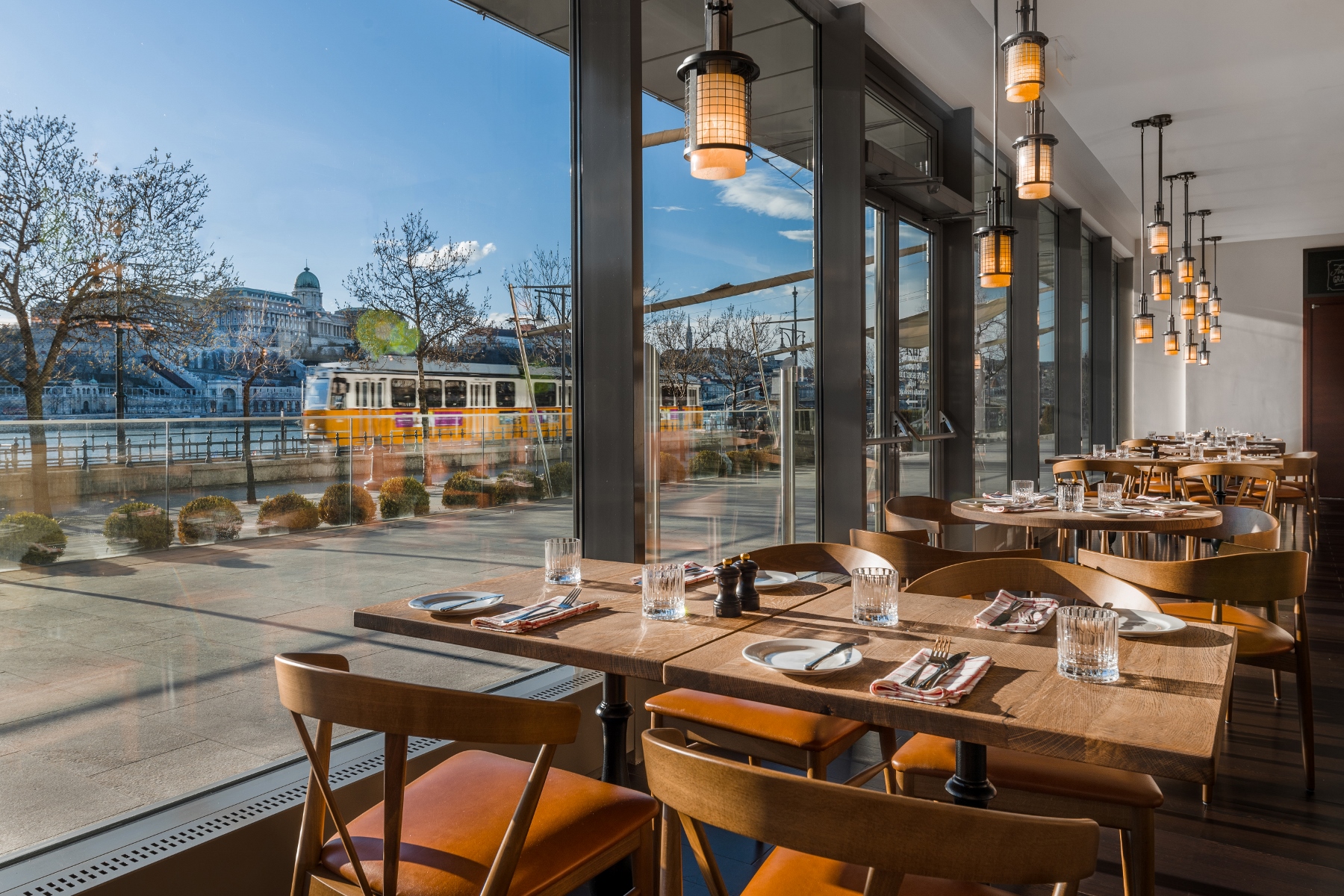 DNB Budapest is a Modern Hungarian Wine Bar + Kitchen. It combines contemporary urban design with local vibes. As for the food, ingredients and artisan products are sourced from within 100 km.
Beside the a’la carte dining the restaurant offers business lunch, special Saturday Shopper’s Lunch and Sunday brunch.

Paris Budapest Restaurant and Bar is the place that satisfies not only the hungry body but the five senses, along with the inquireies of the mind.

The restaurant offers a wide variety of meals from both from the French and the Hungarian cuisines as well as a selection of wines of high quality. The internal decoration reflects the sophisticated artistic styles of the great names of both cultures.

The Lánchíd as its main attraction provides an excellent opportunity for visitors to have a taste of the foods as well as of the great Hungarian architecture.

The comfortable bar is the scene of free and easy amusement enhanced by brilliant piano music and drinks. The café invites visitors to relax In the company of high standard journals, pieces of the classic world literature while enjoying the atmosphere created by tea and coffee. 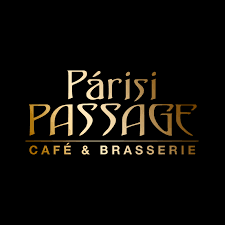 The Párisi Passage Café & Brasserie has been established in the impressive passage area of Párisi Udvar Hotel Budapest. During the day, it has a feeling of a teeming café, in the evening it offers a special but laid-back dining experience.

The chef, László Papdi created something extraordinary, by combining the latest technologies and the art of cooking, while using honest and local ingredients and saving the flavours of the Hungarian cuisine.

The Párisi Passage preserves the classic values whilst offers new, original and fresh dishes to the guests.

Apacuka restaurant is an ideal place for meetings as well as for those who want to find company in a comfortable atmosphere with free vireless internet service, international foods and interesting programs in the evenings. Dependent on guest requirements, both the inside garden and the dining area under glass roof offer beauty and comfort. Open: Monday to Friday 12-02,Wednesday to Sunday 17-02

The unique Bagolyvár restaurant represents the legendary Hungarian hospitability both in the creation of its food as well as in the service of the compassionate staff.

The elegant, comfortable restaurant bares the most basic, but most important values of motherly love which is clearly seen in the selection of the people working for the guests. Except for the only man whose live music provides an amazing contribution to the atmosphere, all the professionals are representatives of the opposite sex.

As a result, whoever dines here is assured that the food being served is spiced with a great deal of love.

Behind the Hungarian National Museum 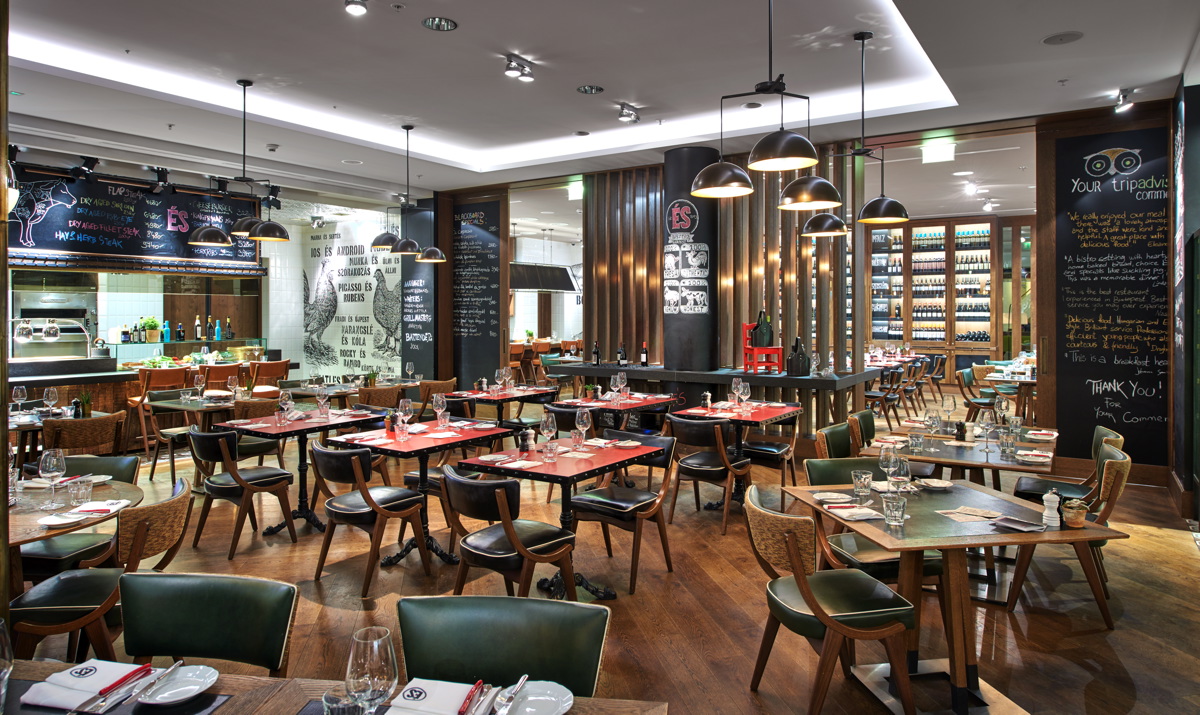 Located inside the Kempinski Hotel, ÉS is a comfortable brasserie-wine bar-pub with a welcoming terrace to relish classic Hungarian and Viennese dishes and grilled meats and fish. Perfect choice for Sunday family lunches. (ÉS means AND in Hungarian.)

Fülemüle restaurant combines the impressive miriads of expensive furniture in a glittering, large room with the talent of the highly skilled, friendly staff. The cuisine represents the innovations and traditions of the Hungarian-Jewish creativity. The Hungarian taste in a Jewish setting offers the discovery of a real union.

The highly decorative restaurant is the home of many weddings and celebrations. Its reputation is the outcome of hard labour as well as of the qualified staff. As one of the most popular dining places, table reservation is only accepted via phone. The cuisine is the reflection of an active, innovative mind at the service of guest requirements.

Jardinette Restaurant is the most friendly and elegant places in the heart of Budapest. Protected by chestnut trees, the garden serves as the home for weddings, business meetings and parties. The restaurant, as a result of its environmental attraction can give space for barbecue parties or high standard occasions. The beauty of the energizing atmosphere highlights the taste of the Hungarian cuisine as well as of secret recipes made of rare ingredients. The unique wine house offers a wide variety of drinks from all over the world.

The romantic atmosphere of Kárpátia Restaurant with its golden walls, wonderful paintings and soft music in the background attracts foreigners and locals alike.

The elegant environment, the fast service are equal preparations for the excellent meal which is a faithful presentation of the Hungarian cuisine. Contemporary or traditional, the chef cannot make a mistake. The numerous celebrations, weddings, business meetings prove that the restaurant is perfect in organization and planning as well.

Kéhli Restaurant since its establishment in 1899 has been operating without the slightest damage of age on it. As a witness of the storms and sunny days of history, the restaurant preserves the traditional with open arms to the new.

The unique personality of the famous writer Krúdi Gyula still lives inside the walls through his works. The separate rooms offer scenes for meetings and celebrations of many kinds but those are also invited who like the freedom of entertainment.

Kék Rózsa Restaurant is the cheapest dining places in the centre of Budapest. However, the meals the staff provides and serves are high above the price, gaining even better reputation to the restaurant.

The compassionate personnel can accommodate 80 guests in three air conditionally rooms. Dependent on guest request it is possible to order half-deal meals as well as to leave with the food. Besides the traditional Hungarian cuisine, the daily menu offers the courses of excellent international dishes.

Marxim Pub represents the past socialist principles but only with regard to the five-year plan of the manager, proving his accuracy.

The pub offers a good atmosphere with much vitty humor as accompaniments to the delicious Italian pizza and drinks. Since everything had to work properly as we know it from history, the fast service is worthy of the morals of the 80s.

Robinson Restaurant, situated on the Island of City Park Lake, is the most attractive sight in the center of Budapest with the view of the Hero's Square, the Museum of Fine Arts, the Zoo, the Amusement Park, and the Art Gallery.

To impress all the five senses, the restaurant offers live latin music in a relaxing, Mediteranian, family friendly environment which is suitable for hosting business meetings of the highest standards.

Its rich gastronomical experience contributes to the unforgetable atmosphere, turning each visit to a celebration.

Rosenstein restaurant is the place that combines the high quality gastronomy with the soft and easy atmosphere of a family centered dining place where guests have the opportunity to interact with each other as well as with the owner. The popular published works such as that of the one by Julia Frank offer a wide variety of knowledge for beginners and professionals alike. E-mail: rosenstein@t-online.hu Opening hours: Monday-–Saturday: 12-–23 o’clock Sunday: closed

Open: daily from noon - 1am

Szép Ilona Restaurant stands as a live chronicler of the legendary Hungarian history. The area it is situated on is near the favorite hunting place of King Matyas, the beloved leader of the country. The restaurant pays special attention to education using the atmosphere as well as the talent of the highly skilled chef who cooks the traditional meals of the Hungarian cuisine.

Széphalom Restaurant provides unique compositions of the traditional Hungarian cuisine in an elegant restaurant where both the meals and the atmosphere warms the heart. The soft jazz music enhances the creation of the calmness that is required for a healthy dining. The wide variety of wines serve not only as accompaniments but as live representations of theircountries of origin.