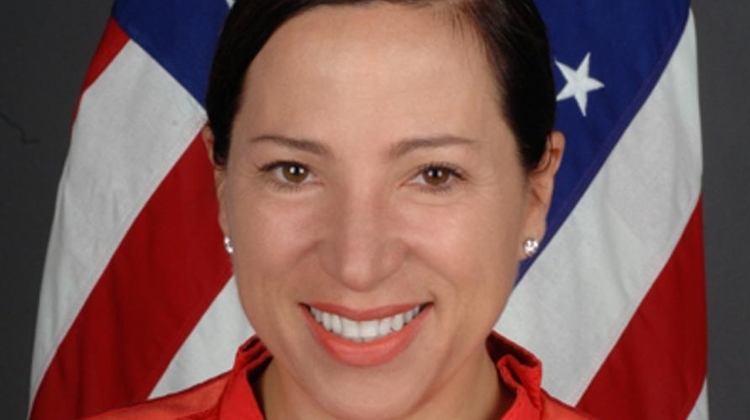 Ambassador Eleni Tsakopoulos Kounalakis was sworn in to office by Secretary of State Hillary Clinton on January 7, 2010. She presented her credentials to the President of Hungary, László Sólyom on January 11, 2010.

Before accepting President Obama's nomination to serve as U.S. Ambassador to Hungary, Eleni Tsakopoulos Kounalakis was president of AKT Development Corporation, one of California's largest and most respected land development firms.

A prominent businesswoman, Ms. Kounalakis earned her undergraduate degree from Dartmouth and an MBA from the University of California at Berkeley. She served two terms as a California State World Trade Commissioner and sat on the board of directors of the Sacramento Metro Chamber of Commerce.

Ms. Kounalakis was a staunch advocate for interfaith dialogue with the World Council of Religions for Peace, work for which she was recently awarded the medal of St. Paul, the Greek Orthodox Church of America's highest honor. Her appointment by the Mayor of San Francisco to serve as a trustee of the renowned San Francisco War Memorial and Performing Arts Center allowed her to combine her skills in real estate with her love of the arts.

Ms. Kounalakis served four times as a delegate to the Democratic National Convention and as an at-large member of the California State Central Committee. An active outdoorswoman, she enjoys hiking and skiing with her family and served as a trustee of Robert Redford's Sundance Preserve and on the Conservation Fund's National Forum on Children and Nature.

1. When did you arrive in Hungary and what brought you here?
I arrived in January to take up my position as the U.S. Ambassador to Hungary.

3. What surprised you most about Hungary?
The men are very handsome!

4. Friends are in Budapest for a weekend - what must they absolutely see and do?
Visit the baths, Gödöllö and the Terror House museum. Walk around Váci Utca and buy a piece of Herendi.

5. What is your favourite Hungarian food?
Foie Gras three ways. The three ways always vary, and I love them all.

6. What is never missing from your refrigerator?
Cheese, always cheese.

7.What is your favourite Hungarian word?
Üdvözlöm

8. What do you miss most from home?
I would say my friends and family, except they are all coming to visit!

9. What career other than yours would you love to pursue?
I love being part of the US Foreign service, it is a new career for me, and I cannot begin to imagine anything better.

10. What's a job you would definitely never want?
Lion Tamer at the Budapest Circus.

11. Where did you spend your last vacation?
Hajdúszoboszló

12. Where do you hope to spend your next holiday?
Pécs

13. What was your favourite band, film, or hobby as a teen?
I loved the Beatles. Loved them. And Elton John.

20. What would you say is your personal motto?
Zorba - Live life as though you will live forever, and each day as if it were your last.