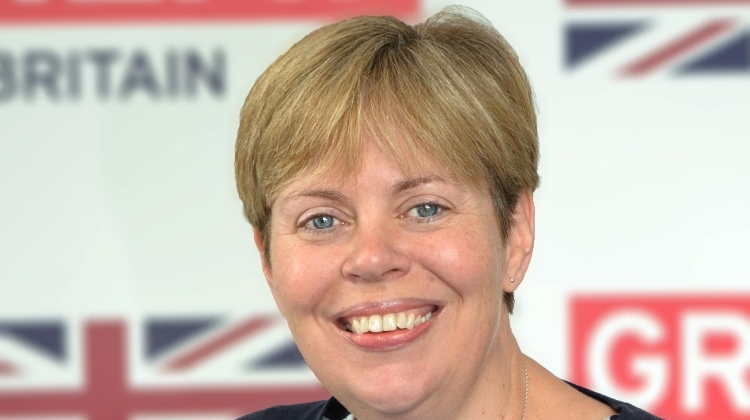 At work I’ve been busy as Deputy Head of Mission for 3 years and I’m now even busier as Chargé d’Affaires until our new Ambassador arrives next year. I’m starting to think about life after Budapest, which is both sad and exciting. At home my daughters have all grown up. And my husband had a year at the British Embassy in Afghanistan and has now left the Diplomatic Service to work at a school in London.

2. On a scale of 1 to 10 how happy are you with your life in Hungary, and why?
9. I love Budapest, I love my job, and I’m very lucky to have amazing friends and colleagues here. The missing 1 is for my family and friends in the UK, who don’t visit as often as I would like.

3. What’s the best party you’ve been to while in Hungary, and why?
I had a significant birthday at the end of 2012. And a significant party to celebrate. It was just before Christmas, I had my whole family here, and my husband arranged for old friends from around the world to come as a surprise. It was good to catch up with so many people, but the weekend wasn’t long enough.

5. What hidden talents do you have?
I’m quite good at tonguetwisters, including some in foreign languages.

6. What was the most interesting travel trip you have ever taken?
A visit to a coalmine in Donetsk, Ukraine, in March 1987. My first assignment on my first posting (to the British Embassy in Moscow), travelling with members of the British/Soviet Coal Working Group. Memorable and fascinating for many reasons!

7. If you were given a wish that could come true, what would you ask for?
I’m afraid that’s a secret.

9. If someone wrote a biography about you, what would the title be?
I used to joke that it would be Daughter of a Gun (as my father was a Canon...).

10. What is the perfect pizza toppings combination for you?
Egg, anchovies, mozzarella, olives. Anything salty.

11. If you could trade places with any other person for a week, real or fictional, with whom would it be?
Princess Charlotte of Cambridge. So that I only had to worry about sleeping and eating.

13. What’s the best website you’ve ever visited, and why?
The BBC. I can trawl through it for hours, learning lots of things as I go.

14. Who do you admire the most, and why?
My daughters. They are smart, sensitive, funny and kind young ladies in a tough world. One of them is about to do a skydive to raise money for the mental health charity Mind, which is mind-bogglingly brave.

15. What do you like best and least about living in Hungary?
I love living in Budapest for the beautiful views. There is always something to look at. But the roadworks in Buda are driving me crazy at the moment. The time it takes to get anywhere (and the risk to life and limb of walking around Szell Kalman Ter) definitely take the edge off this beautiful city.

16. What has made the biggest impact on your life so far, and why?
My university education. Because it gave me the space to grow up and figure out who/what I wanted to be. And because it gave me lifelong friends.

17. If you won USD 30 million, what would you do with the money?
I don’t do the lottery and I’d hate to win that much money. It would be too much responsibility. I’d give it to my daughters, godchildren, and charities as quickly as possible.

18. If your life had a theme song, what would it be?
Top of the World by the Carpenters.

19. If you could live anywhere in the world, where would you choose?
Camps Bay, Cape Town.

20. In ten years from now what will you be doing?
Exactly what I’m doing now, except that I’ll be an Ambassador in my own right, not a Chargé. I’ll be getting ready for a long and happy retirement and wishing that I had not given away that USD 30 million