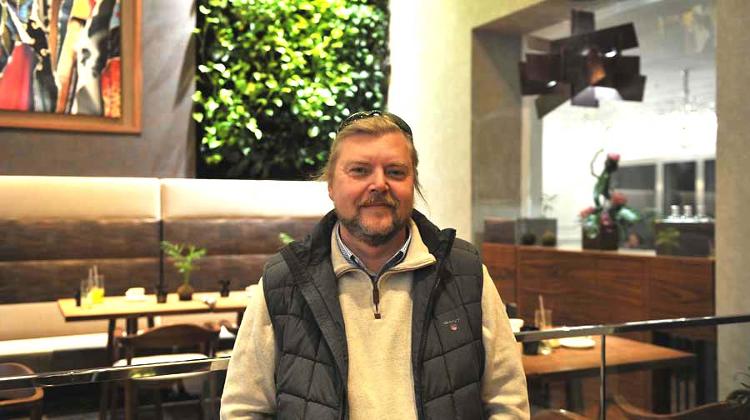 Károly is regarded as one of post-communist Hungary’s greatest success stories: from roadie to head of the company organising several of the country’s biggest festivals, including one of Europe’s most popular cultural events, Budapest's Sziget Festival.

A passionate event organiser since high school, he founded Sziget aged 22 with friends and his personal savings, and at the start of 2017 he sold the company to Providence Equity Partners, the U.S. Equity Fund – click here for more details about the sale of Sziget.

Last year Gerendai revamped the area around Lake Lupa, a former quarry on Budapest’s northern outskirts, into a beach-like resort and a water-sports centre - he signed a 20-year contract to lease the area with an option to buy it later.

XpatLoop caught up with him recently to ask about the sale of Sziget, how he spent the money he made, the cost of his success, and how he feels about now working with foreigners, amongst other related business and personal topics.

What do you love most about your life?

That I’m in control of my life. I'm my own boss, and I’ve never had to do things I didn’t enjoy doing.

Someone recently described you as a visionary, what's your view?

I wouldn’t call myself a visionary; but I do like to see past the end of my nose, as they say. I like to think ahead and analyse to find solutions. As far as I can see, many people don’t try to change anything in life, they live from day to day. I like to find out what’s missing from my life, and from others’ lives, and look for a solution to that.

This doesn’t mean I can see the future, I often catch myself running ahead of certain market needs and expectations and hoping that the future will turn out my way, only to realize it won’t, or not at the pace I thought it would.

I’ve already organised festivals and opened fine dining restaurants when doing so wasn’t in keeping with current trends. It’s quite lucky that later they came into fashion. In most cases I followed my instincts and my own needs when opening a new restaurant or a club or so on. I’ve never followed others fashion, what I liked just happened to coincide with actual trends later on.

Was everyone in your team in favour of selling Sziget?

I can’t speak for the others, because those who are not happy probably won’t tell me that they aren’t. But I think we all agreed, after many discussions, that for the company to keep growing it is essential to be international, and for that we needed a serious partner.

We haven’t really spoken about this in public much, but our part of the selling price didn’t just go to the four owners, but to everyone in the team. Everyone worked hard throughout the years. Our accomplishments were reached by the input and excellence of each member of the team, so everyone deserves the financial success as well.

Our team is a bit like a big family of 64 members, where we cry together during the hard times and laugh during the good.

How much money did you make from the 70% sale?

I can’t really talk about this as there is a non-disclosure clause in the sales contract, but I can say that we were happy with the selling price, and we got what we expected. I can also say that the company’s performance had a lot to do with the price of the sale.

How do you plan to spend the money you made from selling Sziget?

To be honest I already had it well planned out. 2/3 of my part isn’t even my part anymore, it’s my children’s. The remaining 1/3 will be invested in the other plans I have, such as the Lupa Lake project, and to two other ideas that I need to find time for. So I have plans I aim to achieve, and the success of the business is as important as achieving my personal goals.

What's the cost, if any, of your business success on family life?

I started working at the age of 16, alongside school at that time. I’ve always done the work I had to do; and alongside that I had the chance to travel and to visit some beautiful and exciting places around the world, to create a family, and a good standard of living, but still there is a lot I didn’t have time for yet.

As a teenager I didn’t go to parties, I went to work. During the evenings I either was putting up posters, collecting tickets at concerts, or lifting the loudspeakers at gigs. I am not complaining though, I really enjoyed it all at that time, but in favour of success I missed out on many things in my life.

And that is a price I paid, it also cost two of my marriages, and my son and I lived separately for six years, but thankfully at age 13 he moved back.

I have two daughters and a son, and would like all of my children to do something they really enjoy.

But how will they make a living from what they like doing? Well, I hope to create a base so they will never have to worry about what they eat tomorrow, but I don’t want them to take things for granted.

I really like that my son chose to live in The Hague and work there as an accountant for an oil company, although he would like to become a DJ. I respect he is living an independent life, and wants to achieve his goals abroad so he will be judged entirely based on his performance, and that won’t be associated with my name.

Overall it doesn’t matter what they do, as long as they do something that’s important to them, without living entirely from my pocket.

Now with your new business partner, you have international people in your team, how do you feel about working with foreigners?

It hasn’t really come to light yet, the two or three people who we are working with right now are investment advisors, helping our investor navigate in the world of show-business.

As the investor is a classic financial fund, this is normal. We don’t know yet how they will be involved on an everyday basis, but it will be definitely useful to have people seeing things from a different point of view. So I think it will be a functioning unity.

In the case of any disagreements it’s true that they have the 70% and we the 30% share, so in the contract we stated that the management rights belong to us, which means that we will get to make all the everyday decisions.

Of course, I am still a little bit concerned about being a minority shareholder in my own company, but so far we have had good experiences. They are friendly and helpful.

You had one long-term foreign colleague so far, Dan Panatescu, you even named Sziget's Main Stage after him, please share more about this with us

Unfortunately Dan isn’t with us anymore due to a tragic accident. You know I’ve always liked to work together with people of different nationalities. An important aspect is if they accept you as an equal partner, or not.

I’ve never had a problem with this so far, no-one ever told me how it should be and gave me no room to reflect. I’ve never had a boss in my life, so I am a little bit afraid about being given orders I may disagree with.

Not with Dan but it has happened before that someone from England, or the US, came to Hungary and thought they knew better than us, just because they are from a 'bigger and more successful country'. I realise that regarding certain questions they really might know the best answer, but at least I would like to have the opportunity to analyse and to reflect on the matter.

I don’t want to ever accept decisions just because ‘they are made by a bigger dog’ without reasonable discussions. And I truly hope that nothing such as, “I know better and so that’s how it’s going to be without any further discussion,” will ever be said. It is important to emphasize that we haven’t experienced anything like this, not even in the slightest, and if we had we wouldn’t have signed the Sziget sale agreement.

Interview held in Hungarian by Stephen Linfitt & Melinda Székesvári
Transcript translated into English thanks to Timea Klincsek
Photos by Russell Skidmore for XpatLoop.com