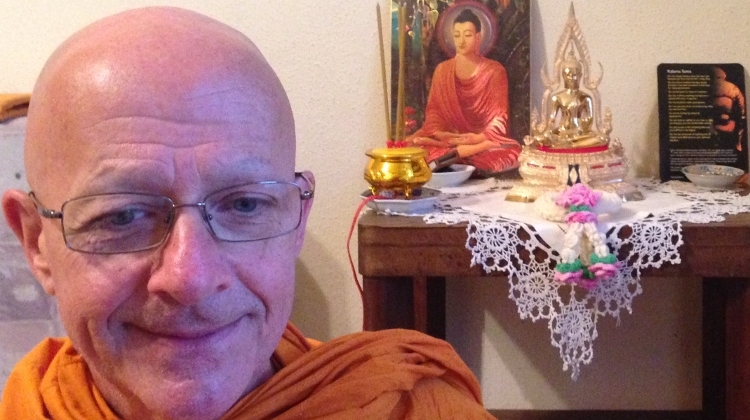 ​​​​​​​Luangta (Bhante) Vilāsa, that is, Vilāsa bhikkhu (’monk’) — lay name: István J. Schütz —, is a monk in the Theravāda tradition, born, raised and educated in Budapest, Hungary, a Virgo born at the end of August he says.

As to his qualifications and earlier occupations, he was active as a linguist and translator, university teacher and researcher, furthermore, trained bookseller and importer of books. In the 59th year of his life rich in events, after long years of providing round-the-clock home care for his mother as well as for his aunt, he ordained as a Buddhist monk at the end of January 2013 in Burma (Myanmar).

He pursued Buddhist studies at the International Theravāda Buddhist Missionary University (ITBMU) in Rangoon (Yangon), attending 22 lectures weekly in nine subjects. Luangta Vilāsa concluded his intensive studies there with a diploma in Buddha-Dhamma.

Luangta is coming from the authentic, living tradition of Theravāda Buddhism in which he was trained as a monk — a conservative tradition which has succeeded in preserving the pristine purity of the teachings of the Buddha for nearly 2,600 years. Luangta is intent to present and share the way of the Buddha to which he is devoutly committed.

In his own teaching and practice, Luangta richly draws from the inexhaustible treasure house of the Teachings as well as from the incredibly wise and pragmatic teachings of the so-called Thai forest tradition — such as, for example, Ajahn Chah, Ajahn Brahm, or the somewhat different Ven. Thanissaro Bhikkhu and others —, or from those of the late Ven. Buddhadāsa Bhikkhu, another outstanding Thai meditation teacher and great Buddhist thinker of the 20th century.

To some extent, Luangta is happy to incorporate — and to rely on — guidance and advice from the Burmese masters Sayadaw U Tejaniya and Sayadaw U Jotika, and the insights of the late Mogok Sayadaw, to name but a few. Needless to say, Luangta makes good use of his own experiences and understandings, too.

Still as a layman, Luangta had the honour to offer, as Dhammadāna, his translation into Hungarian of the late Sayadaw U Pandita’s great meditation handbook In This Very Life which came to be published in 2010.

At the end of March 2018, Luangta Vilāsa returned to his native Hungary. He has been a resident monk at the only Thai temple in Hungary, Wat Thai Rattanaprateep (1161 Budapest, Rákosszentmihály, Batthyány u. 51.), since July 28th. — This is, actually, his second attempt to come back to Hungary since 2016.

Luangta offers regular Q & A sessions on Buddhist topics and meditation practice with or without guidance in English on a weekly basis -  every Saturday - starting at 3:30 p.m. Buddhist life coaching (of a radical sort!), individual teaching and counselling, courtesy visits and the like by appointment via e-mail

Where did you grow up?
In Budapest, Hungary.

If you could be an expat anywhere in the world, where would you choose?
I have been an expat in my life a few times: to begin with, for more than seven years in then Western Germany, between 1983 and 1990; then, during my university studies in Iceland (1993/94, summer 1995); Southeast Asia, in 2010, then between 2012 and 2018: three years in Burma/Myanmar, nearly twenty months in Thailand, one month in Sri Lanka, and three months in Malaysia … Now I am trying to exist as a re-pat in Hungary.

If the mind is OK, no matter where one happens to be at any given time, whereas a rigid mind finds contentment nowhere.

What would you miss most if you moved away from Hungary?
I couldn’t tell, really … Why not ask: „what is it you would not miss …”?

Friends are in Budapest for a weekend - what must they absolutely see and do?
To begin with, I wouldn’t come for a weekend: for ever-busy and ever-eager laypeople, there are so many things to see and do here … to still their need for nourishment of all the senses.

What is your favourite food?
I am afraid I no longer have such thing as ’favourite food’ … Certainly, there are things I do not eat, but I do eat most things.

What is your favourite sport / form of exercise?
Some gymnastics both early morning and in the evening. Although not a physical exercise, I pracise guided yoga nidra every evening, before going to sleep. I heartily recommend it to anyone, also as a sound foundation of (Buddhist) meditation practice.

What is your favourite place in Hungary?
Alsópetény, a specific garden with a specific house …

What career other than yours would you love to pursue?
This is yet another good example of how the average human mind works: all too often, we find no contentment in where we happen to be, what we happen to be doing, how we happen to feel, with whom we happen to be with and so forth. There is a great rendering of a key term in Buddhism: unsatisfactoriness. That’s it.

What was your favourite band, film, or hobby as a teen?
Bee Gees, Massachusetts. — Easy Rider, the original version. — Coins, postcards … be pen friends with many people around the globe … and a special — and early — interest in SE and East Asia.

Apart of temptation what can't you resist?
Quelle question … !

Can you describe your day, please?
This would be a difficult task.

Book or movie?
Monks do not seek mundane entertainment. (Well … in theory at least.)

Morning person or night person?
Monks, especially those who do practise meditation daily, are morning persons.

Which social issue do you feel most strongly about?
Plights of the needy; environmental issues; altogether, the workings of global stupidity, irresponsibility of the elites worldwide etc.

Which achievement in your life are you most pleased about?
About being a Buddhist monk, about being able to delve deep into the teachings of the Buddha …

What would you say is your personal motto?
Here’s one of my favourites, coming from Einstein: „Only two things are infinite, the universe and human stupidity, and I’m not sure about the former.” (And another possible candidate I have just come across as I set out in search for the former quote: „The difference between stupidity and genius is that genius has its limits.”)

I feel tempted to add that I often claim to be so much blinded by my own stupidity — what stupidity: fatuity! — that I don’t realize how stupid/fatuous I am!