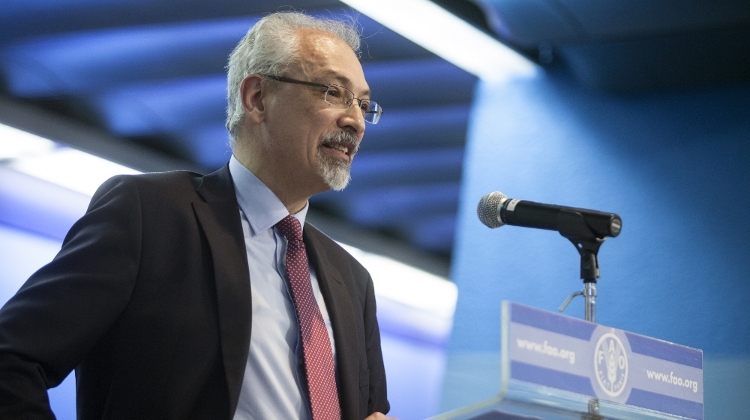 Stefano Bonezzi has worked for the United Nations Food and Agriculture Organization (FAO) since 1988. He moved to Hungary in late 2010 to become head of the Regional Administrative Unit at the FAO Regional Office for Europe and Central Asia in Budapest.

Before arriving in Hungary, Bonezzi worked at FAO offices in Tunisia, Samoa, Viet Nam, Madagascar, Togo and in his native country of Italy, where he worked at FAO headquarters in Rome.

Prior to launching his FAO career, he served as a lieutenant in the Guardia di Finanza, the Italian law enforcement agency under the Ministry of Economy and Finance.

He received his education at Luiss Guido Carli University in Rome, where he studied political science with a focus on international relations and affairs, graduating in 1986.

1. When did you arrive in Hungary and what brought you here?
I arrived in Hungary near the end of 2010 as a transfer from Tunisia, where I had spent five years. I left Tunis just a few days before the beginning of what was then called the “Arab Spring.”

The trip to Hungary was a return to the Europe I had left in 1989. This meant switching back from the Mediterranean “let’s do it tomorrow” modality to the Continental idea of “let’s do it now.”

I have spent more time abroad than in my own country. So, I would consider my family and myself as citizens of the world.

3. What surprised you most about Hungary?
Things are sometimes complicated, and communication is not always easy. But in the end, everything works quite well. I also was surprised by Hungarians’ strong perception of national identity.

4. Friends are in Budapest for a weekend - what must they absolutely see and do?
I would tell them to wake up early and quietly walk around to enjoy the beauty of this city – for example, the Citadella, the Chain Bridge, the Basilica and the Széchenyi thermal baths.

5. What is your favourite Hungarian food?
Well, let’s say that Hungarian food is quite rich and rather different from my national dishes. But I very much like Hagymás rostélyos.

6. What is never missing from your refrigerator?
Parmigiano Reggiano. I have brought it from Italy to be used here on most pasta dishes – but never with seafood!

8. What do you miss the most from home?
I probably miss the flexibility of my Italian countrymates the most.

9. What career other than yours would you love to pursue?
If I had to start a new professional life, I honestly would probably choose the same job I have now.

10. What's a job you would definitely never want?
I would never want to be a banker.

11. Where did you spend your last vacation?
Having lived for many years outside of Europe, we realized that it was time to get to know our continent better.

Last year, we spent our holidays in Italy, on the east side of Lake Garda, and in Bretagne, France.

12. Where do you hope to spend your next one?
Still thinking about that one! As usual, the decision will be made at the last minute.

13. What was your favourite band, film, or hobby as a teen?
As a teen, I loved Bud Spencer and Terence Hill’s movies. At that time, the two were very popular in Italy.

Even though I am not a teen anymore, I still very much enjoy watching their movies.

14. Apart of temptation what can't you resist?
I can’t resist watching motor racing.

15. Red wine or white?
Either, provided that it’s dry!

19. Buda side or Pest side?
I live in Buda and work in Pest, which is the perfect combination for me.

20. What would you say is your personal motto?
“Be loyal to others and to yourself.”