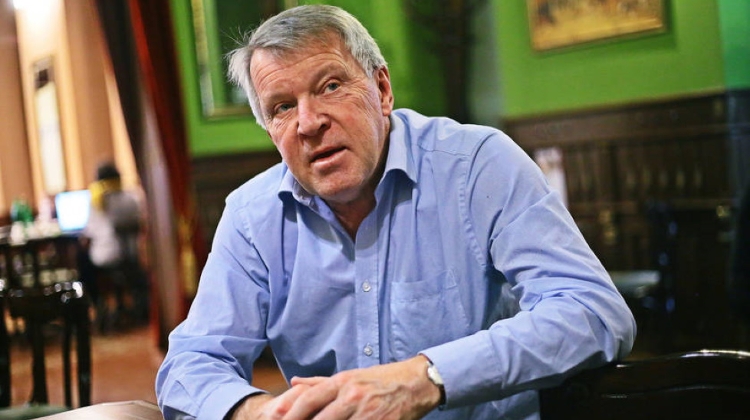 Mark William Christopher Higgie (born 26 July 1957) is a former Australian diplomat, political advisor, and intelligence analyst. He was Australia’s ambassador in Brussels (to the EU, NATO, Belgium and Luxembourg) between 2014 and 2017.

He previously served as international advisor to the Hon Tony Abbott MP, both when Abbott was Leader of the Opposition (2010–2013) and when he was Prime Minister (2013–2014).

Together with the relevant shadow ministers and their staff, he coordinated the Liberal-National coalition's international and national security policies (foreign affairs, defence, immigration, trade, veterans' affairs, ethnic affairs) at its campaign headquarters in Melbourne at both the 2010 and 2013 federal elections.

The Financial Review's 2013 national power survey listed Higgie fourth on its Defence Strategies sectoral list. Foreign editor at The Australian Greg Sheridan, to whom he has been seen as close, has described him as a 'highly regarded professional' with good connections among Coalition politicians.

Prior to joining Abbott’s team, Higgie served for three years as the representative in the UK of the Office of National Assessments, the government’s intelligence assessment agency on international affairs. In this role, Higgie was the Australian representative on the Joint Intelligence Committee (United Kingdom).

At the conclusion of his posting then Hungarian president Ferenc Mádl, accompanied by prime minister Viktor Orbán, awarded him the Commander's Cross of the Order of Merit of the Republic of Hungary, the country's second-highest honour, for services to Hungary-Australia relations.

He has a BA (Hons) in Russian and Political Science from the Australian National University (1981) and a PhD from the same institution for a thesis on nationality policy in the Soviet Union, East Germany and Yugoslavia (1987). While doing research for his PhD in 1982, he undertook an internship at Radio Free Europe/Radio Liberty at its then Munich headquarters.

Since concluding his posting in Brussels, Higgie has been a regular columnist on international affairs issues for the Australian edition of The Spectator, which in 2019 designated him as its Europe Correspondent. In 2019 he also became a Senior Fellow at the Budapest-based conservative think-tank the Danube Institute. He is also an occasional columnist for The Australian.

1. When did you arrive in Hungary and what brought you here?
I was posted to Budapest as Australia’s ambassador with my wife Zoe and our two daughters in 1998. Since the conclusion of that posting in 2001, I’ve done many other things, but we became very fond of Budapest and have visited regularly ever since - helped by the fact that Zoe found and bought a lovely old apartment in Pest during my posting, which we still have.

2. Have you ever been an expatriate elsewhere?
Yes, on diplomatic postings in Belgrade, Vienna, London and Brussels, and as a child also in Paris.

3. What surprised you most about Hungary?
I was impressed by the rich offerings of things we love: historic architecture, classical music, old cafes and restaurants. Hungary’s location in the centre of Europe and the ease of using Budapest as a European base was another major attraction. We were surprised that so much of Hungary’s rich culture and past had survived war and the 45 years of communism. More recently we’ve been pleasantly surprised by the very high quality of Hungarian wines.

4. Friends are in Budapest for a weekend - what must they absolutely see and do?
The obvious sights - the Parliament, Castle District, Heroes’ Square - one of the baths; the Terror Museum; one of the traditional cafés and a restaurant with a gypsy orchestra; if time the magnificently restored Fine Arts Musum.

5. What is your favourite Hungarian food?
Bableves, paprikás csirke, töltött káposzta, the salads, Eszterházy cake, lángos for a winter’s day at the flea market.

6. What is never missing from your refrigerator?
Hungary’s best salami, spicy Bocskai (only, as far as we can tell, available at the Rákóczi tér market), Pannónia cheese, a loaf of one of the heavy peasant breads, Soproni beer and Hungarian riesling or sauvignon blanc.

7. What is your favourite Hungarian word?
I have a particular fondness for fényképezögép, which our Hungarian language teacher in Canberra used as an example of why the language wasn’t so complicated after all. I also like homlokzat felújitása, meaning the exciting prospect of another fine old building soon to be restored.

8. What do you miss most from home?
Meat pies, cheap oysters and the world’s best easy-peel mandarines. Also, when faced with the sky-high wine prices at Budapest’s smarter restaurants, I often think fondly of Australia’s BYO (bring your own wine) tradition.

9. What career other than yours would you love to pursue?
I can’t think of anything preferable to my current life.

10. What's a job you would definitely never want?
Just about anything other than what I’m doing now.

11. Where did you spend your last vacation?
My life is to a great extent a permanent vacation but we greatly enjoyed recently revisiting two of our favourite parts of England, the south Devon coast and the Yorkshire Dales.

12. Where do you hope to spend your next holiday?
In our flat in Pest, which is lucky as under the current emergency rules we’re not allowed to move.

13. Apart of temptation what can't you resist?
A big walk in freshly-fallen snow followed by a schnitzel and beer; a Liszt Academy performance of one of Beethoven’s orchestral works or the operetta for one of the Kálmán Imre favourites.

14. What was your favourite band, film, or hobby as a teen?
Herb Alpert and the Tijuana Brass, stamp collecting, tennis.

16. Book or movie?
Book - especially as there seem to be so few good movies these days.

17. Morning person or night person?
Can I say afternoon?

18. Which social issue do you feel most strongly about?
Quality education; if I’m allowed a second, preserving and restoring historic architecture.

20. What would you say is your personal motto?
Never bolt your door with a boiled carrot (Irish proverb).