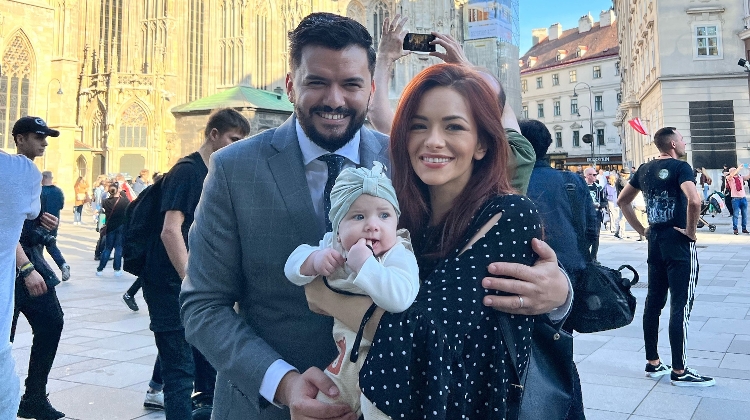 Started as a Seconded National Expert at the European Union Agency for Law Enforcement Training in 2019, on behalf of the Romanian Ministry of Internal Affairs.

Previously worked as senior police officer at the 'Al.I.Cuza' Police Academy in Bucharest and the Romanian Coast Guard. More about my professional life on LinkedIn.

He married Alisa, here in Budapest, during the pandemic, and they have one daughter, Anastasia, born this year.

I came in August 2019 in Budapest, 'prepared' to represent my country, Romania, at CEPOL - the European Union Agency for Law Enforcement Training. Actually it was all an adventure before my arrival. It all happened so fast in the summer of 2019.

I had the interview for CEPOL and also in the same period, I met my future wife, Alisa. I got accepted to CEPOL and had to pack fast so I had to tell her that I am moving here, after less than 1 month of knowing each other. I thought that is all over, but here we are together, with one baby girl born in Budapest.

This is my first time being an expatriate for a longer time. Over 3 years already! WOW I did experience before longer work related stays in Vienna and Budapest (2-3 months), so I had a preview already about Hungary.

Was a surprise to see so many similarities with Romania. Starting with food (gulyás and töltött káposzta :)), culture and even language. I have in mind three similar words - papucs/papuci, pohár/pahar and palacsinta /plăcintă.

The Danube! It´s absolutely amazing. Day and night, from Szabadsag Hid to Margit Hid, will take your breath away. I also recommend the SPAs, like Rudas, Gellert and why not the Thermal Beer Spa. Also some nice spots where you can see the city landscape: Gellert Hill, Normafa, Fishermen's Bastion.

One is Örs vezér tere. Actually I know is a metro station, but I found it very funny from the first time I visited Budapest. Still don't know how to pronounce it correctly. The second one is elnézést. I use it all the time in the supermarket when I need to ask about a product. But I always continue the question in English. You should see their face ;) Also, google this two: Micimackó  and Frédi és Béni, avagy a két kőkorszaki szaki.

Actor/Singer. Probably this is what I would have done if I had taken other roads in life. After I failed the entrance exam at the Police Academy in Bucharest, I went to the exam for the University of Movie and Theatre. But I failed there as well :))

But I still wanted to wear an uniform, wanted to do changes and work for others safety. So I tried the next year the exam at the Academy again. So here I am. But I still sing as a hobby. I am also playing the CEPOL Band :) Maybe will have a public concert someday. Who knows...

Forensic pathology doctor. The name is too long and also the autopsy part. Neah.

Last one was in Romania. Sea side - Constanta, after the baptise of our daughter, it was the most convenient place.

Travelling. Now it's more complicated, but we use to decide in the middle of the night to go to Rome, for example.

Band: Queen and Holograf (RO)
Film: Matrix, The Fifth Element and the Lord of the Rings
Hobby: Guitar playing, acting

With a baby, I cannot say anymore. She decides.

Digital society. Is the world we leave in and impact all aspects of our life. I also write about this, especially online security.

Pest. Downtown. Close to everything

Nihil Sine Deo (Nothing without God)