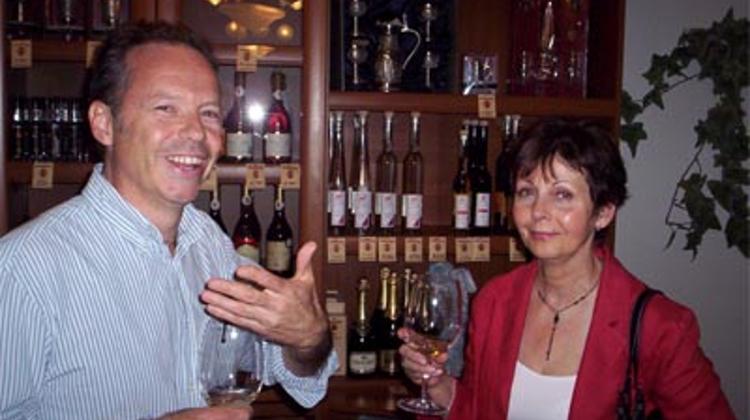 The latest Xpat Wine Club event took place at the Bortár in the stunning neighborhood of St. Stephen's Basilica. The evening’s hostess, Dr. Varga Katalin, Managing Director of Settlers Hungary, is co-owner of the shop and dabbles in wine only as a 'hobby'.

She feels that in order to know a country, one must eat, drink, and live as the locals do. “I encourage the expat community to get to know Hungarian wine, because I believe Hungarian wine is among the best in the world,” Katalin declared.

The Xpats (30 or more internationally-minded Hungarians and expats) who mixed and mingled at the event made a fine effort to do just that, enthusiastically tasting and discussing the wine selection on show.

Each wine was individually presented, providing insider information and interesting tidbits about each selection, giving a mini-tour of Hungary’s wine regions and traditions in the process.

Opinions varied on which wine was best, although the Tokaji was widely and unanimously praised. British eXpat Richard De La Rue preferred the award winning Kadarka, calling it “a tasty red.” The Rojnai Rizling, which was introduced as “Villa Tolnay’s pride,” was also well received.

Although the wine was obviously the focal point of the event, the social aspect proved to be just as enjoyable. American expat Carol Powers, who arrived in Hungary just two weeks ago, appreciated the chance to network with other foreigners. “I just moved to Budapest, and I was interested in meeting members of the local community,” she said. For her, the wine was “a bonus.”

It was a fine bonus indeed! Wine-tasters left the event happy and flushed, many clutching newly purchased bottles of the evening’s favorite flavor - guests were given vouchers for the shop and a generous discount if they chose to purchase any of the wines they tasted thanks to the Bortár.

Several guests kindly followed-up by email, for example Kelly Koch, Managing Director, FirstMed Centers wrote: "Thank you for putting on the event last night. Good time had by all. I bought way too much wine afterwards though!!!! But it always comes in handy!”.

Paresh Parmar emailed to say, "Thanks for orgainsing the event; it was fun. Look forward to other tastings".

Words by Anna Angeli for XpatLoop.com