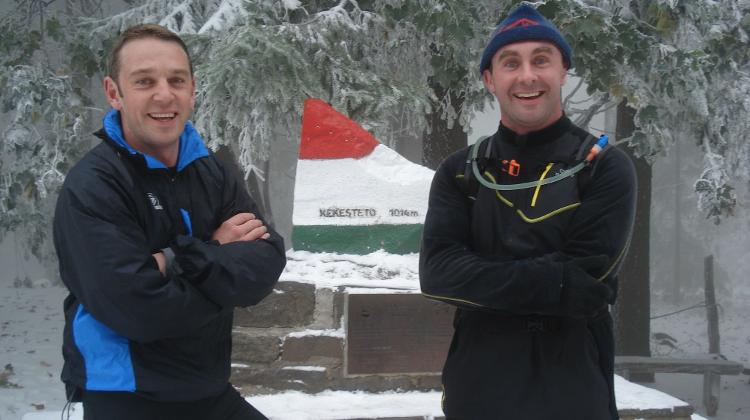 Budapest businesses have begun to throw their weight behind a staggering charity fund-raising challenge that will see two local expats tackle five-and-a-half marathons in six days in the furnace of the Sahara desert.

Officially known as the Marathon Effort For SOTE II, the appeal has an initial target of €50,000 to expand the number of mother and child distance trauma suites at the Second Department of Paediatrics at Budapest’s Semmelweis University Hospital, better known as SOTE II.

Harry Harron, from Ireland, and Briton Simon Saunders will take part in what is known as the toughest foot race on earth: the Marathon des Sables (MdS). The two men are the only Hungary-based entrants from an international field of 750, and the first for five years.

Perhaps appropriately, the Mds starts on April 1, but the appeal fund raising target is already approaching the half way mark. The largest contribution so far announced is from TESCO, which has made a €5,000 (HUF1.3 million) donation.

Budapest Bank is putting up HUF200,000 for the upgrading of the SOTE hospital entrance. The first sponsor on board was PURE Wellness, City Home & Lifestyle Centre in Ó utca, which has been offering the two athletes free use of its facilities during their training programme.

Other sponsorship has come from Amadeus Magyarország Kft (which bills itself as the leading provider of IT solutions to your tourism and travel industry), bottled water company Visegádi, FirstMed, Le Meridien and sports goods and equipment store Decathlon Hungary.

“We are extremely grateful for the sponsorship we have received so far,” said appeal chairman Patrick McMenamin, who runs the popular Scottish pub the Caledonia Budapest on Mozsár utca. “And, of course, we look forward to hearing from many more sponsors to help us reach our target.”

And McMenamin is leading by example. Throughout March, HUF20 from the price of every large glass of Dreher sold at the Caledonia will be donated to the appeal.

“Of course, we still want to encourage people to drink responsibly, but if you normally drink something else, we would hope you might switch to Dreher to help raise funds for this month,” said McMenamin. He is hoping other bars in the city will follow suit.

Greg Dorey, the British Ambassador to Hungary officially launched the Marathon Effort For SOTE II, at the 13th annual Budapest Burns Supper on Saturday 30 January 2010 with the words, "It [the MdS] is not for the faint- hearted. Welcome to the world of masochists and lunatics."

The challenge covers 250km (155 miles), which equates to about five-and-a-half marathons, and is run across the Sahara Desert over six days. Competitors have to carry with them food, clothes, medical kit, sleeping bag, in fact everything they will need for the duration, apart from water and a tent. (Water is rationed and handed out at each checkpoint.)

Harron and Saunders will have to prepare all their own food throughout the race, and will need a minimum of 2,000 calories per day. Mid-day temperatures can get as high as 49°C (about 120°F), much of the day is spent running or hiking across uneven, rocky ground, and up to 20% of the total distance actually involves traversing sand dunes.

“Even though we have run many 42km (26 mile) marathons and mountain marathons between us, this does not mean that we will find the MdS easy – we are doing lots of training,” Harron and Saunders say on their blog.

Saunders is the elder of the two-man team at 38. Now a personal trainer, he is a former cross-country athlete who has represented the UK. Harron, a pharmacist and entrepreneur, is 37. He has plenty of running experience of his own, and has already traversed 500km (310 miles) of this desert using wind power in the form of a kite and an adapted buggy.

The distance trauma suites will allow the mothers of critically ill children coming in from the Hungarian countryside (and possibly, under certain circumstances, from outside the country’s borders) to stay with their offspring, an important aid to recovery. SOTE II has very few such facilities at present.

Directing the appeal and making sure the funds raised will be able to do the most good is the Robert Burns International Foundation, which distributes money raised by the annual Budapest Burns Supper, among other sources. Appeal chairman McMenamin is also a member of the organising committee for the Burns Supper.

Harron and Saunders can be contacted via their blog, and there is also a facebook group  with 355 members. Payment of personal sponsorship money can be arranged through the blog or group, or through PayPal.

Should you wish to discuss corporate sponsorship possibilities personally, Saunders can be reached via email, mobile phone (+36/30 526-3177) or Skype (simonteammypt). McMenamin can be contact via email by clicking here