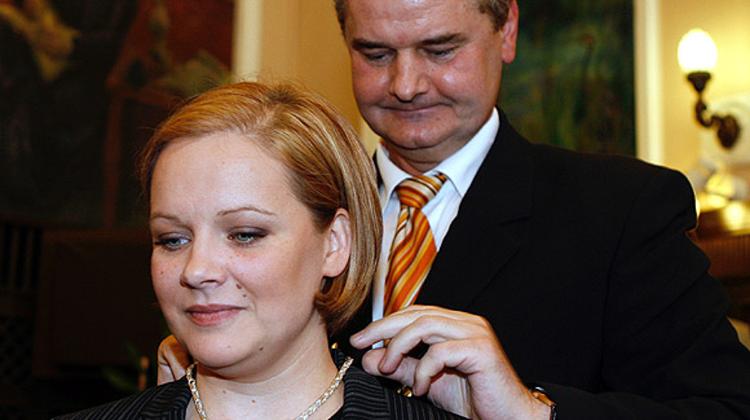 "Hungarian gymnast Henrietta Ónódi has been inducted into the International Gymnastics Hall of Fame. She is the second Hungarian ever to receive this honour. The first was Ágnes Keleti (89), the winner of ten Olympic medals, including five gold.

"Unique perhaps best describes Henrietta Ónódi. While competing in the late 1980s and early ’90s, when the sport was dominated by the Soviet Union, Romania, China and the U.S., Onodi still managed to lift Hungary onto the medal podium," the Oklahoma-based organisation said.

Born on 22 May, 1974, in Békéscsaba, Ónódi always captivated crowds with her dynamic style of gymnastics. Coached by Mihály and Júlia Unyatinszki, the slightly built "Heni" became a fan favourite for both her bold difficulty and clever originality. She began gymnastics at the age of 4 and made her international debut in 1986. She was too young to qualify for the 1988 Olympics but she could already represent Hungary at the 1989 World Championships a year later where she placed 19th in the all-around and 5th in the balance beam event finals.

With a high level of difficulty, innovative moves and nice technique, Henrietta was able to play a key role in international gymnastics for much of her competitive career.

She often added an interesting twist or pose to embellish her routines, which worked to great effect in setting her apart — and often above — her competitors.

In 1989 she became the first female Hungarian gymnast to medal at the European Championships with a gold on the uneven bars; at the 1990 Europeans she placed third in the all-around and the floor exercise. In 1990, she also finished third in the all-around at the Goodwill Games and the World Cup where she won the vault event. At the 1991 World Championships Ónodi suffered a sudden back injury but was able to win a silver medal on vault and helped the Hungarian squad qualify for the 1992 Olympics with an eighth place finish in the team final.

The next year, at the inaugural Individual Apparatus World Championships in Paris, she won the gold medal on vault and the silver on floor exercise. In the same year at the Olympics in Barcelona, Ónodi became the first female Hungarian gymnast in over thirty years to win an Olympic gold medal.

"She tied with Romanian Lavinia Milosovici for the gold in the vault event final; on floor exercise, performing to Hungarian Rhapsody she finished second behind Miloºovici. Ónodi's difficulty level on vault was actually higher than Milosovici's (they both used full twisting Yurchenkos but Henrietta did a piked barani and Milosovici a tucked). Ónodi also performed the difficult triple twist on floor, then an unusual move (nobody else in the Barcelona floor finals did it)." (Source: Wikipedia)

Ónódi retired after the Barcelona Games and moved to the Untied States to pursue a college education - she studied marketing at the University of Incarnate Word in San Antonio, Texas - but later returned to competitive gymnastics. She tried to compete NCAA, but had only two years of eligibility remaining and became disheartened when she could not arrange course transfers, etc. in a timely manner. At age 22, Ónódi helped Hungary to a ninth-place finish at the 1996 Atlanta Olympics.

Ónódi retired for good after the 1997 University Games, and finished her marketing degree in 2001. She landed a job in Miami, Fla., as Director of Community Relations for the World Olympians Association (WOA).

Today, Ónódi and her husband Jim Haley, who was also an Olympic contestant in pentathlon, run Olympic Health Chiropractic in Florida.

Ónódi received the honorary citizenship of her hometown, Békéscsaba in 2008. She was the third to receive that honour.

Ónódi has become the second Hungarian to be inducted into the International Gymnastics Hall of Fame. She was preceded by Ágnes Keleti (89) in 2002.

Keleti also began gymnastics at the age of 4, and by 16 was the Hungarian National Champion in gymnastics. Over the course of her career, between 1937 and 1956, she won the Championships title ten times.

Keleti was considered to be a top prospect for the Hungarian team at the 1940 Olympics, but the escalation of World War II canceled both the 1940 and the 1944 Games. Keleti was forced to stop training when the Nazis invaded Hungary in 1944. But that was probably the least of her concerns.

A member of the Jewish faith, Keleti was forced to go into hiding to survive the war. She purchased working papers and posed as a Christian maid in a village in the Hungarian countryside. Her father died in Auschwitz, and her mother and sister went into hiding, saved by Raoul Wallenberg. They were later discovered and sent to a concentration camp, but survived and were reunited with Keleti after the war.

After the war, Keleti returned to gymnastics and began her ascent to glory. Although a late injury prevented her from competing at the 1948 Olympic Games in London, she was still awarded a silver medal for having been a member of the silver medal-winning Hungarian team. At the 1952 Olympics, Keleti, already 31 (!), won the gold medal in floor exercise; at the 1954 World Championships, she won two gold medals. At the 1956 Olympics in Melbourne, the 36-year-old Keleti won four gold - uneven bars, balance beam, floor exercise and portable apparatus (team) - and two silver medals. While in Australia for the Games, Keleti defected to the West.

She has lived in Israel since 1957, and has served as a physical education instructor and coach for the Israeli gymnastics team. Now aged 81, Keleti remains full of energy and is still able to turn cartwheels.

The Board of Directors of the International Gymnastics Hall of Fame selects those qualified for induction. Nominations may come from the national federation of those nations who hold membership in the International Gymnastics Federation (FIG), or may be nominated by the Hall of Fame Board of Directors. Formal enshrinement ceremonies are held once each year, normally in mid-summer.

A gymnast must have won an Olympic or World Championships medal, of any color, in an individual event. Following the winning of the medal, they must have demonstrated over a period of not less than 10 years a role of active participation and contribution to the sport of gymnastics, both nationally and internationally."