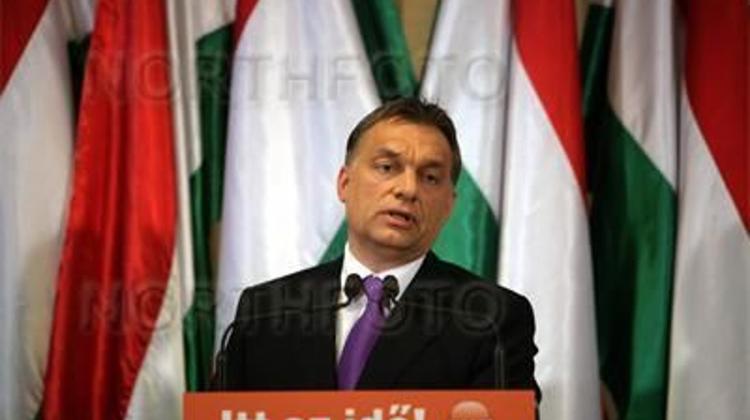 "Hungary’s "freeing itself from the IMF" is one step forward towards the nation’s self-determination, said Prime Minister Viktor Orbán. When the country’s stand-by arrangement with the Fund expires in October, Hungary will have no business with the lender, he added. Orbán stressed that the salary of the central bank’s chief is a sovereign issue and neither the EU, nor the IMF has a say in it.

Thanks for the money, IMF!

Reflecting to the breakdown of talks with the International Monetary Fund and the EU, Orbán said in 2008 these two "saved Hungary from financial meltdown", and "Hungary has to be thankful to the IMF for not letting Hungary suffer the fate of Greece in that difficult position". Although it set "very difficult conditions [...] it did provide (Hungary) an escape route as an alternative to collapse."

The PM stressed this was "not a gift but a loan" with interest that will expire in October and then Hungary and the IMF can go their separate ways.

In an interview with right-leaning television HírTV on Friday, Orbán reminded that Hungary’s deal with the IMF stipulated two things: to repay the loan and that the budget deficit cannot be larger than 3.8% of GDP in 2010.

"The loan needs to be repaid [...] and we will do that," he added. The contract will expire in October and "both parties will be free." Orbán noted there is no process (or talks) to be broken here, as after the contract expires "Hungary will have no business with the IMF."

"I have always considered the deal with the IMF as a forced inheritance. I don’t believe it’s a normal thing that the Hungarian economy does not stand on its own feet. Freeing (ourselves) from the IMF is one step towards national self-determination."

This, however, can be achieved only if one has everything in order "at home", i.e. "if there is growth, the economy is in balance and the markets are willing to lend us money, we will not have to beg for aid. Hungary is very close to that state," Orbán added.

Single deadline for all EDP countries?

He stressed, though that the country’s relation with the EU is totally different, adding that with its 3.8% of GDP deficit Hungary is "one of the most reliable" members in the bloc, with its budget shortfall being the fifth or sixth smallest among the 27 member states.

The European Union "expects from every single member state", Orbán underlined, to take the deficit down to 3.0% of GDP.

"We support that (goal) and we will also reduce the budget deficit to below 3.0%. The question is when. And there are no individual criteria anymore. The EU will set a single deadline for all member states whose deficit exceeds 3% (of GDP). And that deadline will need to be achieved. And Hungary will meet that both in 2011 and 2012," Orbán said.

Portfolio.hu viewpoint:
Orbán has already signalled last week that at future talks with the EU on fiscal issues he will request the EU to apply an 'equal treatment’ policy towards the country as to the deadline to cut the deficit to below 3% of GDP.

"We want to agree with the EU. This is not going to be a deal between Hungary and the EU, but a deal signed by all member states, specifying when countries above the desirable deficit level bring their deficits below 3%," he said.

While 'equal treatment’ sounds a terrific argument, it is unfortunately impossible to apply, given that the 24 member states under the EU’s excessive deficit procedure must bring their deficits to the required level by different dates (mostly between 2012 and 2014). If you take a look at the chart below that contains the European Commission’s spring (May 2010) forecasts for EU members’ budget deficits, you’ll see that a single deadline at this point classifies as a textbook case of a pipe dream.

On 17 July, the IMF and the EU suspended their review of Hungary’s EUR 20 bn emergency bailout without backing the government’s budget plans. The issues remaining are "not insurmountable" and the government should work toward solving them, Christoph Rosenberg, who led the Washington-based lender’s delegation, told Bloomberg. Hungary, however, needs to solve its budget issues even without an IMF programme, he added.

IMF spokeswoman Caroline Atkinson told Reuters that they "remain engaged with the Hungarian authorities and are ready to resume the specific negotiations" and return to Budapest "at any time".

Peter Attard Montalto, analyst at Nomura in London, said Orbán "sounds increasingly emboldened" and that his assumption that Hungary can finance itself with out the IMF is "a myth ".

Orbán said last week that Hungary would not seek to secure a new loan agreement with the IMF after the EUR 20 bn SBA expires in October and would seek funding on the market.

Hungary needs to pay back a total of EUR 5.25 billion in 2011-12 and a new precautionary deal, which the new Fidesz government first said would seek and then decided to rescind, would have allowed part of this debt to be rescheduled. Economists are split whether the country will be able to collect that much funding on the market.

"If we agree with the EU and it becomes clear that it will be easier for us than other states to achieve the 3% deficit, that will strengthen Hungary's credibility in markets to an extent that will make debt financing easier," Orbán said last Thursday.

Orbán said he did not want Hungary to be the first to implement such a special levy on the financial sector, but "could not wait" due to what it "inherited" from the previous administration.

"It hurts bankers and international banking association... sometimes international organisations act like they were the international unions of bankers. [...] they are big shots, powerful and strong and now there’s a country that says: Dear Sirs! You have by far the highest interest margin in Hungary, you have the highest profits here (and although) we do need a well-functioning financial system and we are glad that you are lending to the economy, but now we are in a situation that we need your contribution to public dues."

Orbán said they continue to expect revenues of HUF 200 billion annually form the bank tax both in 2010 and 2011. Asked about its possible phasing out in 2012 he said the size of the tax could be set to "a European median" by the end of the third year.

Simor’s pay is no one else’s business but ours

The new centre-right Fidesz cabinet introduced a cap on public sector pays (HUF 2 m a month) and insists to apply it also on András Simor, Governor of the central bank (NBH), while the European Central Bank (ECB) - and analysts as well - consider it as an attack on the bank’s independence. The HUF 2 m monthly wage ceiling adopted by Parliament last Thursday, is equal to ten times the average gross monthly salary of employees in the national economy. Simor earns over HUF 8 m presently.

Orbán said the IMF and the EU had a single task at the talks, namely to check whether the 3.8% of GDP deficit goal will be reached this year or not.

"I consider any (remark) beyond that a friendly note, a sign of openness to discussion or advice. But we have not discussed (Simor’s salary) because it is not their business but ours," he stressed.

Orbán said Simor "wants to stick his head out higher" than the rest (in the public sector) and insisting on his high salary is a "tasteless and inexplicable behaviour".

Based on the ECB’s opinion , if parliament approved the draft law in its current form, it would infringe EU law and the case would end up at the European Court.

Orbán said Hungary would not discuss the issue with anyone even if "half the world" is against the country because "it is a basic question of principal".

He also said he "politely but firmly rejected the ECB’s opinion", because that is "an insult to Hungary’s sovereignty".