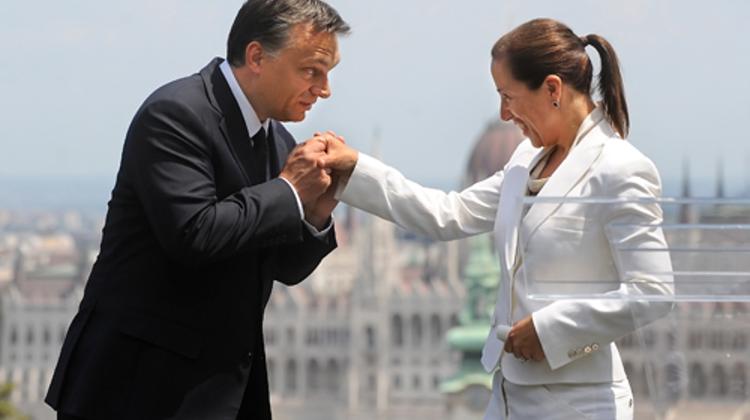 We are especially pleased to be hosting you on this beautiful day at the Táncsics Mihály Compound, which currently serves as home to the Embassy’s Marine Security Guard Detachment. I want to thank the Marines and the entire embassy staff for their hard work in preparing for this celebration, and I want to assure everyone here that we are continuing to work hard to return this historic and beautiful property back to the people of Hungary.

Hungarians and Americans have shared more than two centuries of friendship and that shared history and cooperation continues today with American and Hungarian soldiers serving together in Afghanistan. Hungary is an important NATO ally, and will soon lead the European Union. We are proud to call Hungary an ally, a partner, and friend.

The economic success of both our nations is also an important part of our relationship. Even in this tumultuous financial environment, Hungary continues to attract U.S. investment with its open economy, talented hard working people, and its fabulous infrastructure and, of course, its spectacular beauty. Let me also take a moment to personally thank all of the American companies who generously sponsored today’s event.

It is a special privilege for us to welcome Prime Minister Orbán as our guest of honor today. President Obama pledged in his congratulatory letter to you, Mr. Prime Minister, that we will “continue to build on our solid and longstanding foundation of shared values and aspirations.” I am so proud to be here today representing President Obama, Secretary Clinton and all my fellow Americans to fulfill this pledge.

Dear Ambassador Kounalakis, President-elect of the Republic of Hungary, Excellencies! Ladies and Gentlemen!

Two hundred and thirty-four years ago a new nation was born on the American continent. A great philosopher of the 20th century wrote that this nation has been built on credo, which means strong faith. This faith is celebrated here today, as indeed, the starting and closing lines of the Declaration of Independence formulate clearly and unambiguously the spirit of this faith by referring to the “Laws of Nature and of Nature's God” or to the “Divine Providence”. No political and economic interest, neither rational, scientific line of reasoning is the base of declaring in this document that all men are created equal, that they are endowed with the rights of life, liberty and the pursuit of happiness. It is the unquestionable faith that is behind the idea that all human beings are creatures with free will. This strong faith supported the dream that it is possible to have a world in which people are free. This dream has created the land of freedom on the American continent, and this dream has made of the people of the United States of America great and respected all around the world.

There is a huge distance between Hungary, the Hungarian nation and America in geographical terms, but also in time. However, we share a salient common feature that is our strong faith, which both there and here could create a nation and a homeland to this nation out of various groups of people. The Hungarian nation has also been created based on this credo, on strong faith, and this faith made us capable of offering protection in times when Europe required it. This strong faith helped our nation to get always back on its feet after devastating tragedies, crises, and wars, and never, not even in the most depressing moments of our history let us give up our freedom and our independence.

We, Central Europeans and especially Hungarians have always respected and shared the American ideal of freedom, since we had to fight so many times, even against large powers for our freedom and our independence. Just as the Americans, we also have never given up, not even in periods it seemed hopeless for decades or even for centuries, regardless of how many attempts there have been to deprive the American and the Hungarian people of their freedom and of their faith in freedom.

Obviously this explains that our nations have been part of many struggles together during the last century. We have fought together against communism, against dictatorship, for freedom. We have fought also for the freedom of human spirit, for scientific development and today we fight together against terrorism, against financial and economic crisis, and against various other kinds of danger. During these struggles we were part of numerous successes together. The list of American heroes with Hungarian origin is long: Ede Teller, Albert Szent-Györgyi, György Széll, just to mention a couple of names. To me it has symbolic meaning that the first civilian spaceman is a Hungarian American, Charles Simonyi. I am confident that we need our common faith now and in the future, and I also believe in that the World requires and will require nations with such strong faith in freedom.

On this ceremonial event let me wish the American nation that you could keep your strong faith and your belief that every human being is endowed with free will, therefore, everyone has the right of freedom, independence and the pursuit of happiness.

Thank you for your attention!"