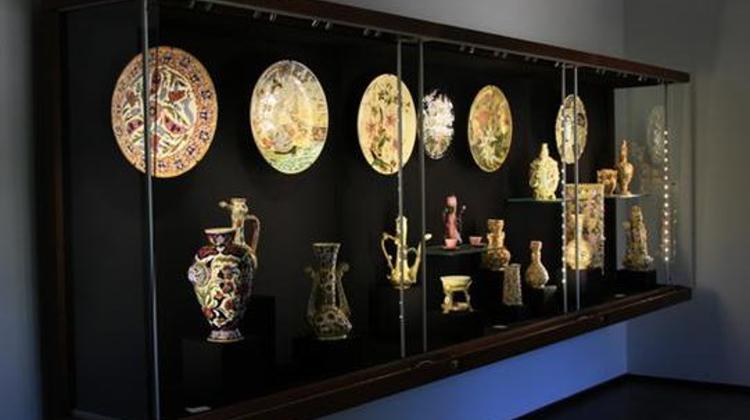 "Since 01 September 2010 people can view the Zsolnay porcelain collection of László Gyugyi American collector at the Sikorski House in the Zsolnay Cultural Quarter. The exhibition entitled the 'Golden Age of Zsolnay' displays such unique pieces that were born in the most successful period of the factory.

The 600-piece Zsolnay ceramics collection has immense significance. Its pieces represent 40 years (1870 - 1910) of three periods from the life of the factory: historism, millennium and secession. The artworks from the period of historism (between 1870 and 1910) were characterised by motifs of nature and the „unique and national" sources of architectural and folklore collection work. It was the task of the Zsolnay mistresses Teréz and Júlia to collect the ornaments. The peculiarity of the collection is that visitors have the chance to view early objects that were created and signed by the mistresses themselves.

The year 1896 was really special in the history of the Zsolnay factory: by the 1000 jubilee of the foundation of the Hungarian state Vilmos Zsolnay had developed a new glossing technique he named „millennium technique". This is the technique from where the later expression 'eosin' was born that basically gave the factory world recognition. The items with Indian, Japanese and Chinese pattern - motivated by the search for the Asian origins of the Hungarians - belong to this period. After the founder passed away, his son; Miklós Zsolnay took over the direction of the factory (1900 - 1921).

Miklós also had a great impact on the life of the factory; he invited József Rippl-Rónai, Sándor Apáti Abt and further representatives from among the young secessionists. In the first decade of the 20th Century 5 artists, 3 sculptors and 2 painters worked in the factory.

The collection has found a place in Pécs in the framework of the Pécs2010 European Capital of Culture Programme in the Zsolnay Cultural Quarter in a secession building that was specially designed for this purpose in the Sikorski Villa.

Preliminary registration is necessary for visiting the Gyugyi collection.