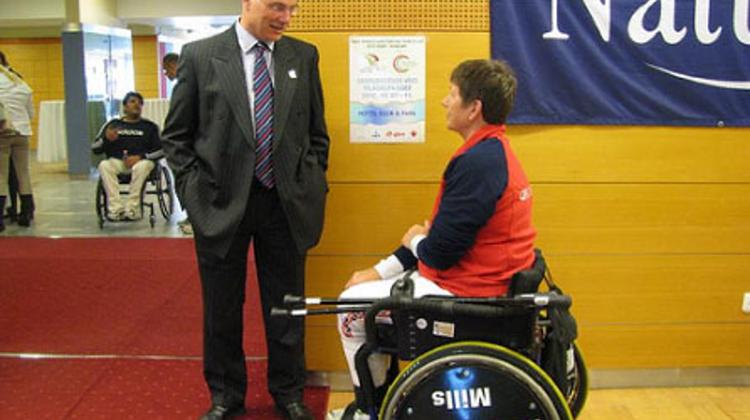 In his welcome speech Greg Dorey promoted the London 2012 Olympic and Paralympic Games and talked about the history and the importance of the Paraympic Movement. He met the Mayor of Eger Mr László Habis and Mr Zsolt Gömöri the President of the Hungarian Paralympic Committe.

Ambassador Dorey had a short discussion with the British Wheelchair Fencing Team and with their Hungarian coach Mr László Jakab, furthermore with Mr Pál Szekeres, who is the only Olympic and Paralympic medalist in the World, currently in the position of Deputy State Secretary for Sports at the Hungarian Ministry of National Resources.

At the end of the day Greg Dorey presented the medals in the company of former Hungarian Olympic champions and the Secretary General of the Hungarian Fencing Federation.

This bilateral cooperation will continue to strengthen up to and beyond 2012, when the eyes of the world will be on the UK as London hosts the Olympic and Paralympic Games. It is anticipated that a formal cooperation agreement to promote the London 2012 Paralympic Games together with the Hungarian Paralympic Committee and with the office of the Hungarian State Secretary for Sports will be signed sometime in November."