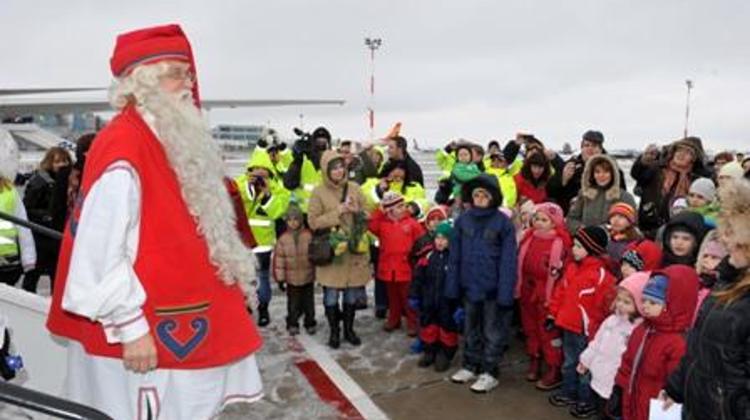 This is the fifth time that Joulupukki, Santa Claus from Finland, came to town via the Malév Helsinki service. On his arrival he was greeted by a group of excited children at Budapest airport. The Finnish Santa was also greeted by Harriet Lonka, the cultural attaché of Finnagora, the Finnish cultural and scientific centre, who said that this year, too, Lapland’s Santa Claus had arrived for charity purposes and he would be trying to meet as many children as possible, including those in Hungary suffering from the recent environmental catastrophe.

Children from the Lőrinc kindergarten and patients of the Csodalámpa Foundation had their dreams come true. After adventures at the airport, presents were distributed at the Airport Hotel in Budapest, where each child collected an exciting gift package from Santa Claus, thanks to Malév and its partners Airport Shuttle Minibus, Mondial Insurance and Le Meridien Hotel. The children thanked Joulupukki for their presents with poems, songs and colourful drawings.

While in Hungary, Father Christmas’s programme took him to several venues: he met children from Veszprém and Ajka, twin towns of Rovaniemi, as well as kids from the areas hit by the red sludge toxic waste. In addition he made visits to several children’s hospitals as well as the Institute for the Blind and the Santa Claus Factory.

Finnagora is the Finnish cultural, scientific and economic centre in Hungary. Its aim is to promote contemporary Finnish art as well as scientific, educational and business life. Finnagora assists in the development of mutual relations and the construction of networks between Finland and Hungary. Santa Claus’s visit to Hungary is sponsored by Malév., Finnagora, the municipality of Rovaniemi, Le Meridien and Auto Nexus Kft.