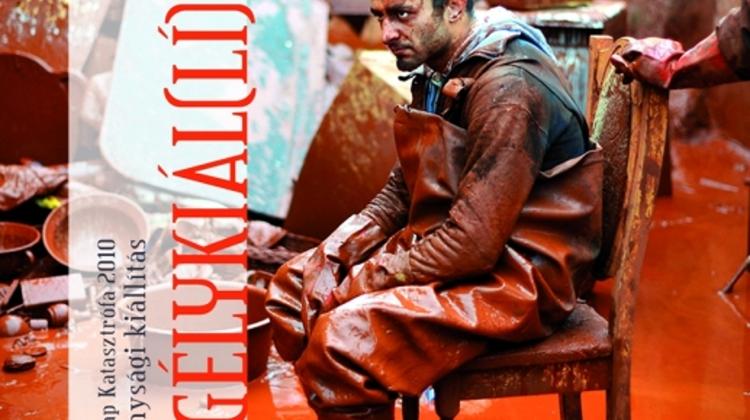 "This red sludge relief exhibition shows photos, videos, and childrens drawings of the catastrophe. Also on display are protective clothing and accessories used by volunteers who attended the site. Exhibition tickets are 500 Ft, the whole amount goes to the victims in Devecser. The Hungarian National Museum, Múzeum krt. 14-16 Budapest, transfers all donations to the aid account of the Mayor's Office in Devecser.

The Hungarian Red Cross, the Caritas Hungarica, the Hungarian Interchurch Aid, the Hungarian Maltese Charity Service and the Hungarian Baptist Aid have all been working to relieve the losses of the people affected by the disaster. They provide shelter and warm food every day for the homeless, distribute food packages, as well as undertake mental health care. Volunteer health workers coming in small groups day after day from the hospitals of nearby towns help to rehabilitate the injured and treat other volunteers.

On 4 October 2010, at 12.25 p. m., the northwestern corner of the dam of waste reservoir no. 10. collapsed at the Ajka Alumina Plant of the MAL Hungarian Aluminium Company, and the spill of toxic red sludge of about 600,000-700,000 cubic metres flooded the lower parts of nearby Kolontár, Devecser and Somlóvásárhely. The torrent, two metres deep at some places, has done inestimable economic and environmental damage in the Ajka region.

The greatest industrial disaster in Hungary's history has taken the life of ten people and more than 150 have been injured. The majority of the injuries were caused by the high alkaline levels of the red sludge. The substance contains toxic heavy metals as well, but it was its pH value of over 13 that caused the injuries. These wounds are similar to first or second degree burns, but given the nature of alkali, they're more difficult to treat and they heal more slowly.

As a result of the reservoir's location, the red sludge flowed unhindered at the three abovementioned places, damaging about 350 buildings, and flooding an area of about 40 km2.

The alkaline sludge, flowing in Torna creek across Kolontár, soon reached the Marcal river, and then the rivers Rába and Danube. The work of environmental specialists reduced the alkalinity of the red sludge below critical level before it reached the Danube, saving the flora and fauna of the river from irreparable damage.

Fortunately, organized relief work started quickly at the site of the catastrophe. Hundreds of people had been left homeless; some of them moved to relatives, others, who had nowhere to go, were accomodated at temporary shelters at public institutions in Devecser and at the Sports Hall in Ajka.

The crew of the National Directorate General for Disaster Management from the first day on have been working to relieve the damage done at the affected localities. In addition to the volunteers, about 1100-1200 people from the Hungarian Army, the National Police Headquarters and the Fire Department, and hundreds of special vehicles are taking part of the recovery efforts organized by the Disaster Management.

The devoted work of the National Ambulance and all the doctors and nurses cannot go without mentioning either. The shocking devastation has urged Hungarians to solidarity. Volunteer efforts during the flood causing serious damage in northeastern Hungary earlier this year were significant as well, but this new disaster, more shocking by its nature, has triggered even deeper sympathy in citizens, civil organizations and actors of economy.

Crowds of volunteers rushed to the area to help the charity organizations. Money, loads of food, chemicals, furniture, domestic appliances and clothes have been donated via the professional and civil organizations that have been working in the area and trying to distribute the donations as efficiently as possible.

With the help of different telephone donation lines, the government-established Hungarian Disaster Relief Fund and the charity organizations more than one billion forints were gathered in three weeks, coming from other countries as well. The people in need got help not only from individuals but from a number of public figures, sports clubs, and actors of the economy.