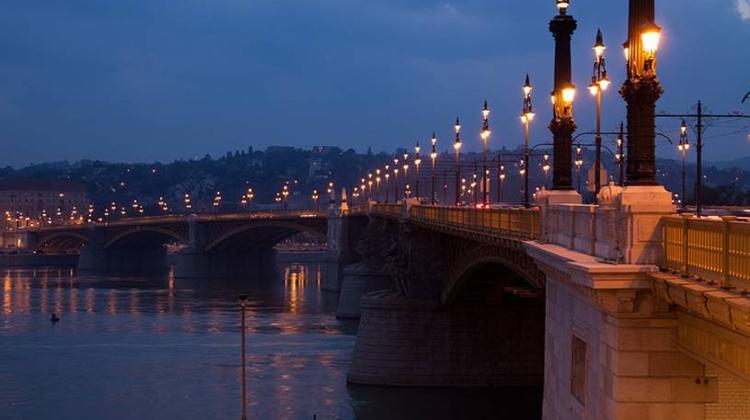 "The light is on! Car drivers and pedestrians along the Danube lift their heads towards the freshly installed new lighting poles on Margit Bridge, admiring with astonishment the spectacular lighting on the newborn Margit Bridge. Indeed, while final construction works on and around the bridge are still going on, one major step has been taken: to bring back to life the former aspect and beauty of the bridge, just the way it was in the early 20th century, with impressive and artistically decorated traditional lighting poles linking both riverbanks in a romantic glow.

Simultaneously with the rebirth of the bridge, the pride of Hungarians and Budapest citizens comes to surface as an elegant Hungarian brand is being reincarnated: Kandeláber. This traditional Hungarian manufacturer of decorative lighting poles stands for no less than references such as Andrassy Street, the Opera House, St. Stephen's Basilica, Chain Bridge, Heroes Square, Schönbrunn and many more.

Back in 1999, when Kandeláber was facing difficult times, the Hungarian-Belgian joint venture Tungsram-Schréder, world leader in outdoor lighting and present in Hungary since 1983, put its belief into the Hungarian brand and invested into a symbiosis of both brands, combining Kandeláber and its Hungarian manufacturing expertise with Tungsram-Schréders’ knowledge in globally leading outdoor lighting products.

When both companies merged in 2004, Tungsram-Schréder decided to respect history and to keep the brand name “Kandeláber” alive. During recent years, the company managed numerous projects successfully, and managed to become the market leader in its field. Now, thanks to the prominence of Margit Bridge, efforts turn into visible results, as –following many successful (but less prominent) projects – Kandeláber’s creativity becomes visible for everybody – on Margit bridge!

The Kandeláber story started in 1982, when Mr. Zoltán Wlassics founded the “Kandeláber Economic Association”. The company’s first workshop was a simple garage where Wlassics and his partners started the hand-made reconstruction and production of styled kandelábers, street furniture and indoor fixtures. The successes of the traditional style public lighting equipment helped the company to quickly acquire a very good reputation all over the country. Important prestige references followed: the promenades of Budapest, the Opera, the Chain bridge, the Danube promenade, Andrássy street and the city centre of Pécs.

The continuous development was paused in 1995 by the sudden death of Zoltán Wlassics, Kandeláber’s intellectual father. Following some difficult years, the company got sustained by Tungsram-Schréder, who acquired a major stake of the company in 1999 and merged into its own structure in 2004.

This merger of two market leaders in their respective fields created the ground for ongoing development and success, uniting Kandeláber’s tradition and style with Tungsram-Schréders’ modern lighting equipment into one very efficient symbiosis. However, both brand names remain independent from one another, reflecting Tungsram- Schréders’ wish to respect Kandeláber’s roots.

New references followed in Debrecen, Szentendre and Kőszeg, indoor lighting of the new National Theatre, kandelábers on Heroes’ square in Budapest, etc. The company soon managed to expand its activities to more than 20 foreign markets : Schönbrunn castle in Vienna, Zurich railway station, Manége square in Moscow, and even Goruku Meitengai promenade in Tokyo have experienced beautification thanks to Kandeláber products.

Today, Kandeláber contributes to our modern world with the respect of traditional values, upgrading public spaces with hand-made style, while answering all modern state-of-the-art technological requirements. The most visible result today is Kandeláber’s prime show piece in the heart of Budapest, materialized 2010/2011: Margit Bridge with its decorative poles and kandelábers."