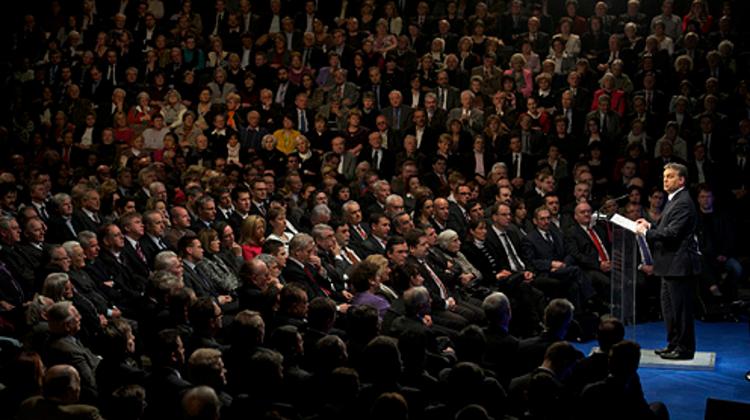 "On 7 February 2012 Viktor Orbán gave his traditional ‘state of the nation’ speech, focusing on the past year. This was the fourteenth such occasion. At the beginning of his speech Mr. Orbán thanked all those who have stood by the country in spite of the criticism directed at it and its government. This was a reference to the four hundred thousand people who took part in the ‘Peace March for Hungary’ on 21 January.

On Europe's position and the strength for reconstruction

The Prime Minister recalled that on this occasion one year ago he had said that 2011 would be an exciting and difficult year.

In relation to the European situation, he pointed out that thirteen governments had fallen in 2011; of these, four had been in countries neighbouring Hungary: Slovakia, Slovenia, Croatia and Romania. Riots had occurred in several otherwise apparently stable European countries, paralysing entire regions within them.

As an example of political instability he mentioned the Netherlands, where the Government can only maintain a majority with the support of extreme political forces. Dangers such as the sovereign default of several eurozone countries had appeared on the European horizon. He added that there was still a real threat of Europe’s economy heading towards recession.

The Prime Minister said that in several European countries the question was not simply one of economic downturn, but also of faltering dreams and self-confidence.

He identified the reconstruction and the revival of communities affected by the red sludge disaster (Devecser and Kolontár) as the most important domestic event of 2011. He said that this also shows that there is no low-point from which new lives cannot be built. This should be something to remember and build our faith on, whenever it is put to the test.

According to the Prime Minister, many people fear new waves of the euro crisis, and fear what might happen if even the current government is unable find a way out of the crisis. He emphasised that “All we need to fear is fear itself; but once we defeat our fear, the road ahead will be clearer.”

The Socialists ran the country aground

The Prime Minister compared those who had run the ship of state aground over a period of eight years with the captain of the recently shipwrecked Italian cruise liner. The Socialists and Liberals were the first to leave the deck, not caring for those they left behind. Now they are shouting advice from the mainland, while they huddle behind the skirts of their foreign business partners.

Mr. Orbán said that his government had known when it took office that the mistakes and negligence of the previous eight years could not be made good in a few months, but everyone remembered what the beached, keeling country was like when the new crew took control.

The legacy left by the previous government comprised the debt trap, worthless jobs and a lack of reserves.

The Prime Minister spoke about the dramatic level of domestic debt which his government had to confront. For one million families struggling under the burden of foreign currency-denominated loans, debt slavery had become an everyday reality. Through the early repayment scheme for foreign currency loans 160,000 families – half a million people – have had the chance to free themselves from this trap, and the burdens on others have also became more bearable as a result of the agreement signed between the Government and the Hungarian Banking Association.

The previous governments also led businesses, municipalities and the state itself into debt. Between 1998 and 2002 the Orbán administration had managed to bring government debt down to under 52% of GDP. If that was still Hungary’s level of debt , “we would be giving loans to the IMF, not the other way round,” and we would be arguing about how many national airlines, hospitals and factories we need to create, and by how much pensions and health workers’ pay should be increased. The Socialists, however, had pushed the country back into a “debt cage” – something which will be hard to forgive.

After 2002, fewer and fewer people of working-age were in jobs, and those who were would be reminded on a daily basis that they could become unemployed at any time. By 2010, 2.6 million taxpayers were supporting Hungary’s population of 10 million. This brought with it the problem that people lived from month to month without savings. The private pension funds paid themselves huge bonuses in the very same year that people lost their savings en masse. The Prime Minister said that the least people could expect from the Government was a calling to account of those responsible.

He said that an enormous “unpaid bill” had been left by the Socialists, who said and continue to say that ordinary people should pay, and that the Government should not ask the banks and international companies to contribute. “We have said ‘no’ to that approach, and have launched a new system of burden-sharing,” said the Prime Minister. He said that single-mindedly pushing through the bank tax, the crisis tax on high-profit sectors and later an early mortgage repayment scheme for those most at risk had not been the most gentlemanly phase of his career. “This will not feature in textbooks on political etiquette, but we had no time to lose, and it had to be done to ensure that the country remained on its feet,” he said.

Mr. Orbán said that he is ready to cooperate with anyone who is willing to help – or at least not obstruct – the Government in the achievement of its goal: that of a strong Hungary. At the same time, he will fight any policy or ambition that seeks to bring back the system and methods which weakened the country and plunged it into crisis.

The country stands on new foundations

Mr. Orbán said that he has arrived at a milestone in the work begun in May 2010, and that Hungary is now standing on new foundations.

The Government has managed to reduce public debt significantly; this is sometimes difficult to realise, however, because of the Hungarian forint’s fluctuating exchange rate. If it had not been for the reduction of public debt, Hungary would now be in the same situation as Greece: it would have lost its independence, and creditors would be taking control. He also mentioned that implementation of the Széll Kálmán Plan has reached 83 per cent.

He also highlighted the results of the flat-rate and family tax systems. He said that the old and disproportionate tax system penalised work and families. Two years ago the situation of families was completely different than it is now: those with children had to pay the same amount of tax as the childless.

Today it is different, and average earnings of those with one child have increased by 8.1 per cent; they have increased by 16 per cent and 23.3 per cent for families with two and three children respectively. The Prime Minister pointed out that the objective is to remove any financial disadvantages in having children.

He said that the attempt is to integrate the interests of the middle-class and the retired: a difficult task, but by no means an impossible one.

On the efforts being made for the severely disadvantaged, he highlighted the public employment programme, which has given work to 206,000 people this year. He is aware that the wage of HUF 46,000 for such work is low, but it is more than the state benefit of HUF 26,000. He promised that school and vocational education of adults would be subsidised, and he also reminded his audience that the transformation of the vocational training system has begun; the essence of this is that more time be spent on practical work than at school.

Concerning the education system, he said that up to now talented young graduates have been leaving the country, and so the system requires fundamental reform. In the future, those receiving state education should commit to working in Hungary for at least some years. Those not eligible for or not requiring scholarships can get preferential student loans – thus education is available to all.

The Prime Minister stressed that a predictable investment climate is also in the interest of the Government.

Large companies displacing small businesses and then taking their profits abroad will not get state support. However, those investors who provide decent jobs for a reasonable profit should be kept in Hungary. The Prime Minister continues to defend corporate income tax, which was reduced from 19 to 10 per cent in 2010.

The country deserves credit for the fact that 2011 was the first year in which the budget deficit has fallen below 3 per cent since EU accession in 2004; this is significant, as public debt automatically decreases if the budget deficit falls below 2.8 per cent.

The new Constitution, which took effect on 1 January, also contains important guarantees on debt reduction and the preservation of a balanced budget, thus preventing irresponsible governments from jeopardising the future of generations to come. The Prime Minister also mentioned measures ending the privileges of the political elite.

Mr. Orbán said that those who speak about the bankruptcy of Hungary – the country losing its battle for renewal – do not know what they are talking about: they do not know the country or the Hungarian people. He stressed that Hungary will always have friends such as Lithuania and Poland, whom he thanked for their support."