Another Super Scottish Supper In Budapest 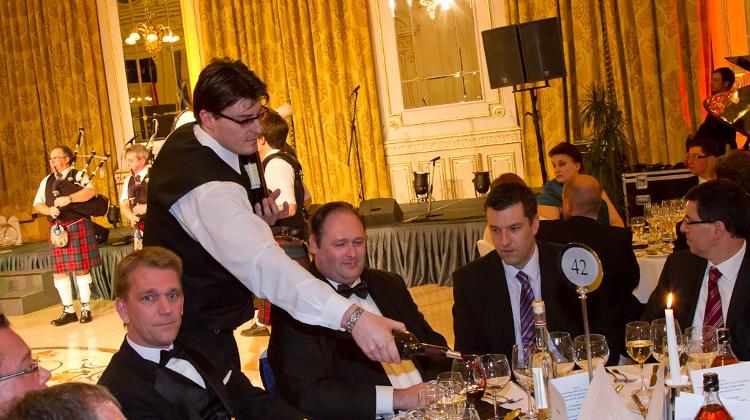 The 15th 'Big' Burns Supper, held last Saturday at the Corinthia, raised almost HUF 5 million for children’s hospitals in Hungary. This traditional Caledonian event, held annually around the world, recalls the words and deeds of Scotland’s national poet, Robert Burns. Feedback from guest was positive, "This is a great example of how generous the Scots are, it's a top class evening," said Patrick McMenamin to XpatLoop.com as he enjoyed a glass of Scotch at the WhiskyNet.hu tasting table.

Stephen Jones, General Secretary of the Robert Burns International Foundation, which organizes the event and oversees distribution of the money, put the figure raised on the night at HUF 4.8 million.

“Although the income was reduced on last year, the raffle and auction are about the same,” Jones said. “Each year we aim to support, from the Burns Supper itself, five HUF 1 million hospital projects, which we will be able to do as we have a surplus in hand from previous years.”

This year the event broke somewhat with tradition, but surely in a way Burns himself, a lover of life and children, would have appreciated. So instead of fine words, there were three short musical performances, each given by a young child who had recovered from serious illness thanks, in part, to money raised by previous Budapest suppers.

Prof Dr György Fekete, the RBIF’s medical advisor, explained to the roughly 200 guests (who each made a donation of HUF 25,000 for their seat), exactly what a difference the fund raising event has made.

“The first child was saved [using equipment bought with Burns Supper money] 15 years ago and is now 15 years old. I hope we can all be here together in the next several years and can celebrate the 30th anniversary, when this ‘child’ will be already 30 years old!" Fekete added,

“The charity of the Scottish community in Hungary has such a valuable impact even for the children themselves.” Parents, patients and hospital staff knew and appreciated the generous fundraising of the Burns Supper, said Prof Dr György Fekete.

Fekete is the former Director of the II Paediatric Department of Semmelweis University in Budapest, which has received much support from the Burns Supper through the years. In his role as medical adviser to the RBIF, he helps sift through the many hospital applications for support to find and select the most appropriate and deserving projects.

Jock MacKenzie, who chairs the Curitorium that oversees the RBIF’s activities, spoke of his surprise and pride that the Supper was still running 15 years after its inception, and thanked guests for their continued support, both for it and the children they helped treat. “I’d simply like to say thank you for coming, and for keeping coming,” he said.

"We are very proud to be part of this event, and to give back to society," said guests Adrian Gray, GM of Le Meridien Budapest, and Emile Bootsma, GM of the local Kepinski Hotel, in unison. Their words sum-up the feelings of all those interviewed by XpatLoop.com - congratulations are due to the organisers and performers at the event, especially the healed Hungarian children.

Words thanks to Robin Marshall, photos by Tamás Rajna

Follow this link for a gallery of event photos